Hundreds of homes in city affected 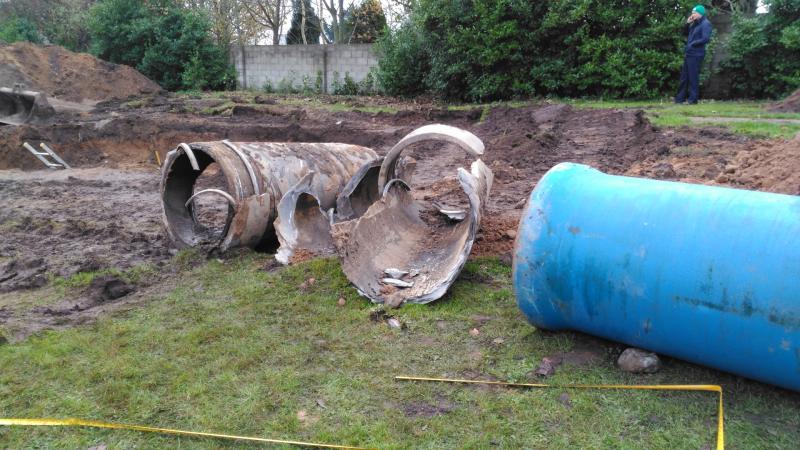 CREWS working on behalf of Irish Water are continuing their efforts to repair a large burst water main which has affected supply to hundreds of homes across the city.

The pipe, which runs under a green area at Rhebogue Meadows, Rhebogue burst at around 2am with a number of local residents describing the noise as being something like an explosion.

Gardai and two units of Limerick Fire and Rescue Service attended the scene for over hour before emergency crews were deployed.

A number of concrete garden walls were knocked such was the force of the water while a small number of houses suffered significant flood damage.

One woman whose home was partially flooded told the Limerick Leader she was awoken at around 2.15am by gardai knocking on her door.

"They just told us that a pipe was after bursting and that we needed to lift everything off the floor," she said adding that her kitchen floor was covered by around two inches of muddy water.

Kevin Sage who also lives in the area posted video footage of the flood waters on Youtube.

He described how the water flowed through the garden of another house and into his back garden.

"It was like a waterfall flowing the whole way across the back garden, it was unbelievable, really," said Kevin.

Because of the size of the burst pipe there are reports of low-pressure in several parts of the city including Rhebogue, Corbally, Moyross and Ballynanty.

Irish Water says crews are working to restore supply to all affected areas as soon as possible.

In addition to repairing the burst water main, crews working for the State utility have been carrying out works at the affected houses to ensure they are safe.

It is understood an assessor also visited the scene this morning to examine the damage caused.

#IWLimerick: Repairs to a large burst main may affect supply to Corbally, Moyross and surrounds. Crews are working to restore supply.