Concerns over traffic incidents at Templeglantine 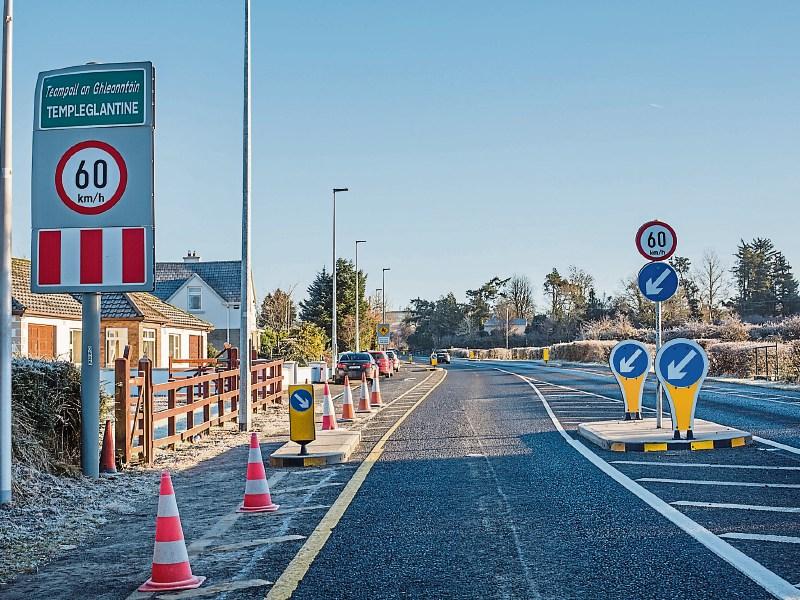 The approach to Templeglantine from Abbeyfeale

TRAFFIC calming measures on the N21 at Templeglantine are having the opposite effect than that intended, according to concerned locals.

And they claim that at least five accidents have occurred at the Abbeyfeale side of Templeglantine since the traffic islands were introduced.

Now, efforts are being made to change the system, starting with a review of accidents.

Local councillor Michael Collins has welcomed such a review which will be carried out by Limerick City and County Council in conjunction with An Garda Síochána and the road safety section of Transport Infrastructure Ireland (TII), formerly the NRA.

“I am happy this is going ahead. It’s a start,” Cllr Collins said this Wednesday.

But locals, among them Eugene Flynn, have already identified the faults behind the traffic calming system and the changes that are needed.

Mr Flynn, whose mother Sadie’s house is just inside the first of a series of traffic islands and the speed limit,, said she is “extremely afraid”.”She is living in fear that somebody is going to end up stuck in her front wall,” he told the Limerick Leader this Wednesday.

The latest accident, he explained, was a near-shave, and in another incident,  the 20-plus foot high 60km speed sign, at the side of her lawn, was knocked over.

The problem, he argued, is that traffic coming from the left is forced through the pinch-point of the traffic islands. “They are hitting the islands,” he said “What is going to happen is someone will hit the house.”

But after the islands, the line of the road curves right, forcing traffic out into oncoming traffic. Big vehicles in particular, Mr Flynn said,, go over the central white line.

Getting into and out from his mother’s house is “a nightmare”, he added.

Seamus Collins, an activist with the Barnagh Action Group,  is also deeply concerned and pointed out that In recent weeks, a string of traffic cones have appeared along the road, a clear indicator of a problem.

“The traffic calming is doing the opposite of what it is supposed to do,” he said.

“It was very badly planned,” he continued, pointing out that access to services in the village, such as the petrol station, the church and the hotel, are made more difficult because of the placement of traffic bollards.

And he argued that some of the bollards and/or traffic islands need to be changed or removed altogether. Crucially, he was convinced that the line of the road coming from Abbeyfeale needs to be re-adjusted and the speed-limit sign moved.

No date has been given as to when the review of accidents will be completed. But the matter is due to come before the Newcastle West Municipal District councillors.