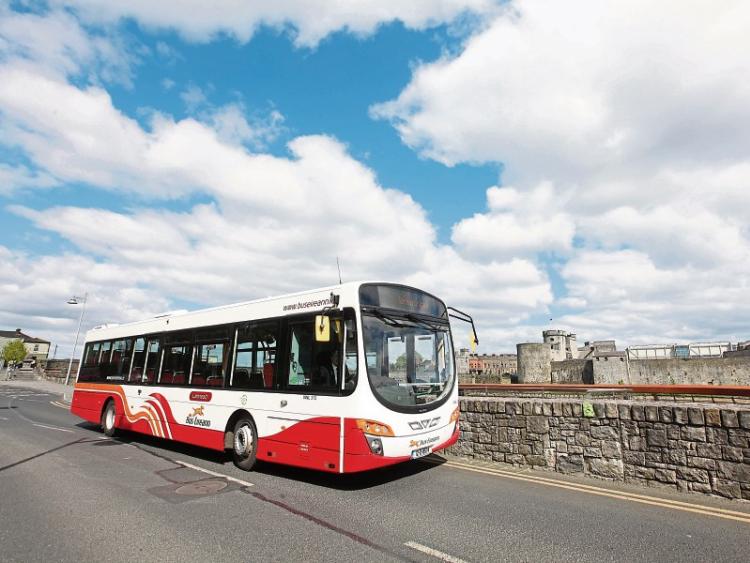 The city is to get a 'significantly enhanced network'

LIMERICK city is to see a boost in its public transport in the coming weeks, as Bus Éireann introduces a “significantly enhanced network” and an extension of late night departure times.

According to a circular sent to councillors on Tuesday evening, the significant changes to the city’s bus services will be implemented on December 4, following a Bus Éireann and National Transport Authority review.

Bus Éireann will introduce a new route, which will see a daily 30-minute frequency, linking Raheen to Monaleen, via University Hospital Limerick, Colbert Station and University of Limerick.

One significant change to the timetable includes the extension of the final departure time, on all routes, to 11.30pm. According to the notice, all routes will see improvements on Saturday, Sunday and public holiday timetables.

There will also be an increase in services to UHL, UL, Limerick Institute of Technology, Raheen Industrial Estate and National Technology Park, Castletroy.

Welcoming the announcement, Cllr Daniel Butler said that the new Raheen-Monaleen route will be “openly greeted locally by parents and students accessing the college for study and work.

“I had received a lot of complaints locally about 304 and how long it takes to get into the city centre. Removing the rail/bus station stop should help with that but I think it could still be a lot more direct to encourage people to use it.”

“I hope this will address some of the increased traffic congestion with the growth in jobs and also the lack of car parking available across the city hotspots.”

He added that the extended departure times will also boost Limerick’s social and commercial scene.

“This will allow people from Raheen and Dooradoyle to pop into town at the weekend evenings for some food and drink in a safe and cost effective way. In turn this can only be good for city centre business increasing ease of access for its customers.”

However, Sinn Féin TD Maurice Quinlivan, while welcoming the overall announcement, is critical over the “failure” to add a route service for the residents in the Old Cork Road area.

“I have been working for a number of years to try and get a bus service to operate on the Old Cork Road. This area has a large concentration of older people who would greatly benefit from a bus service to travel to the City centre to do their shopping and other business. I believe this is another wasted opportunity to provide this much needed public service.”

Deputy Quinlivan welcomed doubling of services on Sundays for Moyross and Southill residents, and commended the advancement in the Raheen and Dooradoyle services.

He said that “this was a particular cause of concern to me as I had dealt with many complaints that the service especially at evening time did run to the planned schedule. I am now hopeful the new enhanced bus service will solve this problem”.

There will be a 7 Day City Network ticket for €20.50, which Deputy Quinlivan described as “cheaper than parking”.

“Buses are a key public service and will be used regularly if they remain value for money and that the service provided is dependable.”