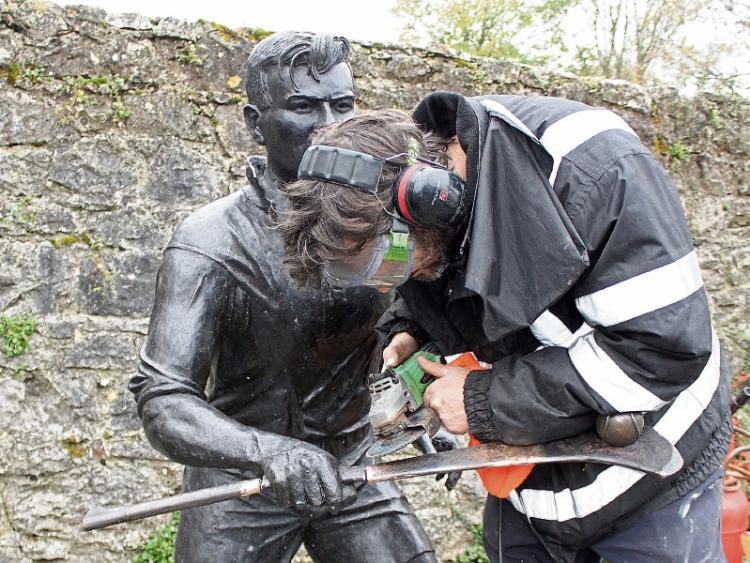 THE MAN credited with inventing the solo run has his hurley back where it belongs – in his mighty hand.

Famed sculptor Seamus Connolly, who spent six months making the Mick Mackey statue, has repaired it after it was vandalised.

On two separate occasions – the most recent on Halloween night – the bronze hurl was broken at either side of his grip.

The work of art celebrating Ireland’s greatest hurler is one of Seamus’ favourite pieces.

He admits to feeling “very glum” when he heard that it was damaged.

“At the time when it was erected in 2013 I said it to them that hurleys are vulnerable because they are bronze and they stick out. That it is likely at some point that it might get vandalised.

“You get very glum when you hear about this but I’m just one person. You think of all the committees – Ahane GAA Club, Tidy Towns etc who put a lot of effort in,” said Seamus.

The one saving grace is that the hurl was left where it fell.

“All you can do is get on with it. You can never get into the minds of people who go out deliberately to do something like that. If you are a person who makes things you are not a person who destroys things.

”Thankfully whoever broke it off didn’t do the really bold thing and take it with them. If they had stolen it we would be casting new sections. We have the bits – we are just putting it on again,” explained Seamus.

It sounds much easier than it actually was. On a rain sodden Friday morning, Seamus’ brother-in-law headed for Portlaoise to bring back a specialist generator at 5am.

“Because it is bronze you are trying to bring the foundry to the statue. The welder itself is very specialised, there are no generators available anywhere in the country except one from Portlaoise.

“I have to bring an amount of gear from Kilbaha to try and do the whole job on the spot. Other work needed to be done - it got a bit of a rocking as well,” explained Seamus.

In the pouring rain he ran a stainless steel rod up through the middle of the hurley and welded it back to the statue. It is fitting as Mick Mackey was a man made of steel when he donned the Ahane and Limerick jerseys.

“The hurley is back where it belongs. It took the whole day, it flogged down, it was the most miserable day and the generator had to be brought back that night. It is a pity these kind of measures have to be taken,” said Seamus.

Richard Harris, John B Keane and Páidi Ó Sé are just some of the Irish legends Seamus has celebrated in life-size bronze but Mick Mackey is a favourite.

”I love every piece that I do. I was really happy with Mick Mackey when it was in clay. It is a very powerful piece because he has a great head - I was very happy with it,” said Seamus.

And now everybody in Castleconnell and Ahane GAA Club hope the statue honouring the legend’s memory will be left alone.

Padraig Power, chairman of Ahane GAA Club that erected the statue, reported the vandalism to gardai and anyone with any information is asked to contact Castleconnell garda station on 061 377105.