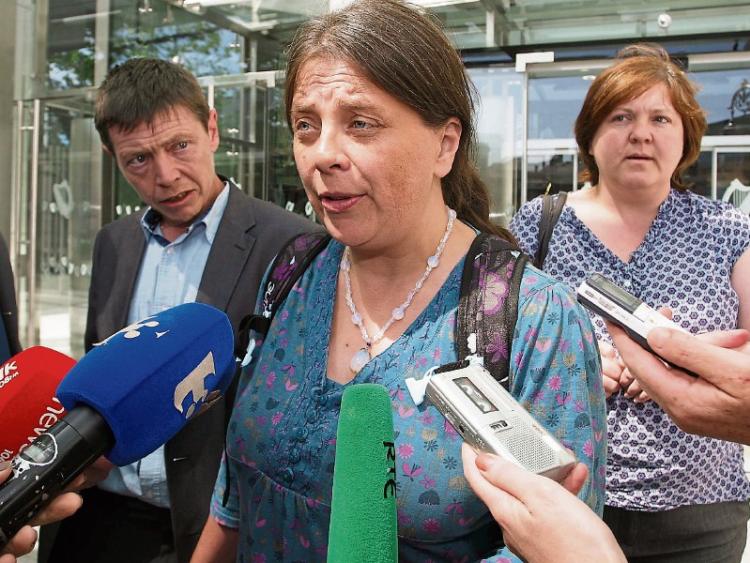 Maria Dempsey, Rockchapel, speaking after the sentencing in 2013 of John Geary Picture: Courtpix

THE mother of one of four young people murdered in Newcastle West six years ago has said that the time was right to speak out on domestic violence.

Maria Dempsey made national headlines this week after a powerful contribution to the Safe Ireland summit on domestic violence in Dublin.

Maria is the mother of Alicia Brough, the 20-year-old who was murdered in Newcastle West six years ago by local man John Geary.

When Alicia returned from the shops with Sarah’s three-year-old son Reece, Geary then turned on them, murdering them before leaving the house and heading to Co. Clare.

The slaughter of these four innocents shocked the country at the time and in her message to the Safe Ireland summit, Maria said she wanted to be a voice for Alicia and for all those affected by domestic violence.

“After six years I want to give voice to Alicia and so many other women who are not here with us because they were taken, viciously, unjustly, violently,” she said.

She also called for domestic violence to be included as a cause of death.

Speaking to the Limerick Leader following the summit, Maria, who lives in Rockchapel, said it was not just the victims and their families who suffered.

“It affects your neighbours, your school community. It is massive,” she told the Leader.

“Every child going to the school my children go to, has been touched by this. We were shocked as adults. How can those children deal with what has happened?”

Her heartfelt plea now is for those affected by violence to be heard and to be better supported.

“I want to go out there and I want every service to hear what it is like for a family which has had trauma,” she said.

Counselling services in rural areas are practically non-existent, she pointed out, and her family was put on a five-month waiting list for counselling in Cork city miles away.

“You shouldn’t have to go on a waiting list,” she said.

Maria also called for more openness about anger and trauma. A lot of people, she feels, are “walking around with things they can’t talk about.”

“Pain is held,” she said, and people push it down, but it rears its head. “That is why we need to talk about it.”

She described the Safe Ireland summit as a very inspiring  and enriching experience and she praised the organisation for the support it has given her.

She also singled out Hozier, whom she met at the summit and described his song Cherry Wine, about domestic violence,  as a “beautiful poignant message”.

“He is a beautiful son of Ireland,” she said. “He is one of the ones who are changing this country.”

Maria’s contribution to the summit came almost six years to the day since her eldest daughter’s death.

“Every year before I just cried and cried. This year, I got hope,” she said.

Asked about Geary who is now serving his sentences,  Maria said: “It is not that I forgive him”.

But she is mindful of the pain the Geary family is suffering.

Maria and her husband Paul have six other children, ranging in age from five to 21.

“I have a big heart but there is always a crack in it. I don’t know if it will ever heal. Maybe it will,” she said.