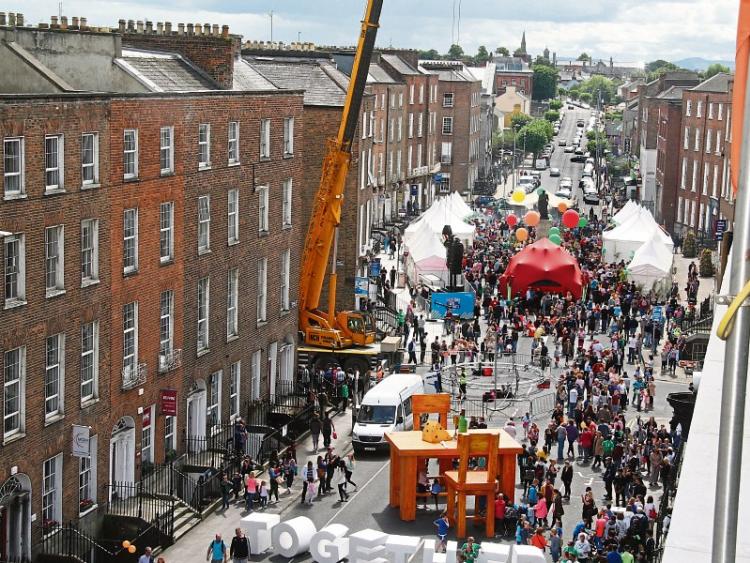 The street party to welcome the 2020 judges in July. The bid was unsuccessful but spend on culture is to increase next year

LIMERICK City and County Council has been commended for increasing its spend on arts and culture next year.

An additional €600,000 has been allocated to arts and culture in the city and county.

This money was previously earmarked for Limerick’s European Capital of Culture 2020 campaign if successful, but it is now being pumped back into the council’s annual spend after the designation was awarded to Galway.

Arts and culture officer, Sheila Deegan, welcomed the councillors’ decision to pass the budget, which will see a total of €3,003,290 spent in 2017.

She said that the adopted budget could prove to be a “model” in the context of a new national partnership agreement — between the Arts Council and the County and City Managers Association — which looks to strengthen the relationship between the local authorities and the national agency.

She added that, thanks to the €6m funding for the National City of Culture 2014 designation, the initiative was able “to kickstart a real understanding of the return on the investment in culture".

In a briefing document, presented to councillors by 2020 bid director Mike Fitzpatrick and Ms Deegan, the council is aiming to spend €12m on arts and culture by 2021, with €4m to be sought from commercial sponsorship and philanthropy, matched by funds from Government and national agency funding.

The proposal intends to create a new cultural division within the local authority in the process.

The document, Limerick, Culture Capacity and the Way Forward, outlines a five point plan of strategic priorities over a five year period, with a number of large scale cultural highlights promised, including several elements of the draft programme assembled for the 2020 bid

While Cllr John Gilligan welcomed additional €600,000 for arts and culture, he said that it was “unlikely” that the council will secure €4m from commercial sponsorship and philanthropy.