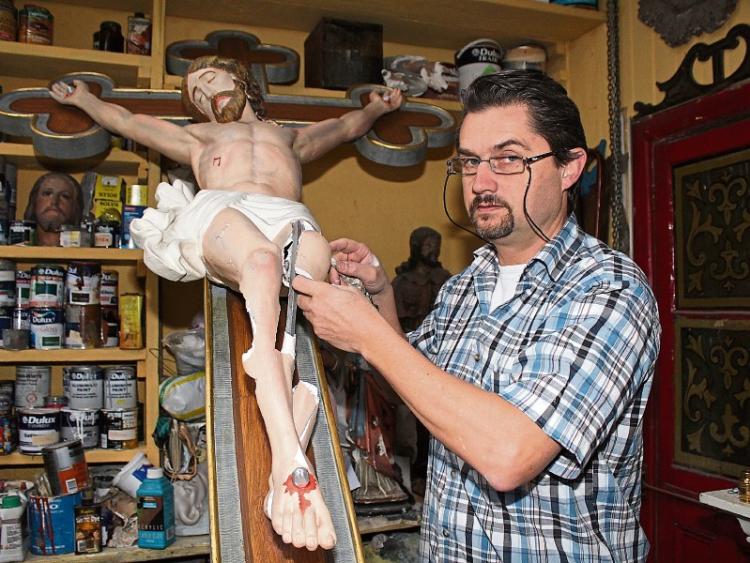 THE MAN behind restoring a significantly damaged 151-year-old crucifix in Limerick has said that he is confident that it will be returned to its home before the start of Christmas celebrations.

Last Monday, a man entered the Redemptorist Church, on Mount St Alphonsus, South Circular Road, and did “extensive damage” to the historical crucifix that has been in the church since 1865.

Within minutes of the incident, gardaí were called to the scene. The following morning, Randel Hodkinson, of Hodkinson and Sons Ecclesiastical Decorators, removed the holy item to his Henry Street studio.

Mr Hodkinson said that the Redemptorist Church is anxious to have it returned before Christmas.

“I will try and piece it together as much as possible, from the remains of the pieces that came off it. But I will probably have to build it up and cast new pieces for it as well. The main bars that strengthen it are still in place, so it will be a matter of working plaster around it to make up the legs again.”

Other than the recent incident, the crucifix has never been damaged before, and has been kept in great condition.

“It’s practically kept in its original condition. It’s a shame, really, that this happened to it.”

The crucifix was built by the famous Mayer of Munich in the 1860s, and is made of plaster of Paris, built in sections, supported by an interior metal frame, explained Mr Hodkinson, whose family business has been operating out of Limerick city for close to 150 years.

Rector Fr Seamus Enright told the Leader that it was an “unfortunate incident”.

“The crucifix has been in the church since 1865 and is an important part of the spiritual and cultural patrimony of Mount St Alphonsus.

"We are grateful to those who have been in contact with expressions of sympathy and offers of financial support. People can show their support by praying for all involved and, if they wish, by donating to the Redemptorist Christmas Hamper Appeal.”