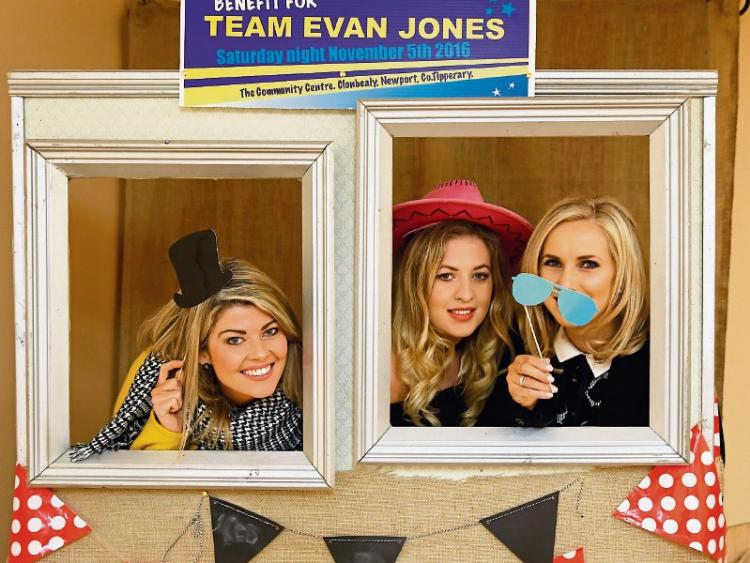 Kate Shinnors and Melisa Hickey with Marisa Jones at the fundraiser

THE PARENTS of a brave little boy from Newport said they have been “overwhelmed” by the support of their community.

Evan Jones was only 20 months when it was discovered in July he had a large tumour growing in his neck. A nine hour operation successfully removed it but a biopsy showed he had a malignant Rhabdoid tumour – a very aggressive and rare form of cancer.

Treatment is a course of intensive chemotherapy and radiation. A stem cell transplant may also be required. Evan will be treated in Dublin but he may have to travel to Germany for further treatment.

To help support Evan and his parents, Paddy and Marisa, a fundraising committee was set up. Over 1,200 took part in a fun run recently and that night the community centre was packed with 450 people for a benefit night and auction.

The committee’s target of €40,000 is expected to be exceeded such was the community’s generosity.

Evan’s dad Paddy addressed the crowd and thanked everyone for their fantastic support.

He outlined that the family had a long road ahead to get Evan back to full health and that “whatever is needed to achieve this will be done”.

Paddy said how “overwhelmed” both he and Marisa were by all the support that the community had shown towards them - not just financially but in terms of well-wishes and the positivity they got from seeing the crowds over the last week.

Paddy said all support would be used to get Evan back to health and that then there would be donations to Crumlin Children’s Hospital. A presentation was made to the committee to mark all their hard work and they promised Paddy, Marisa, Evan and his brother Ben they would be with them “every step of the way”.