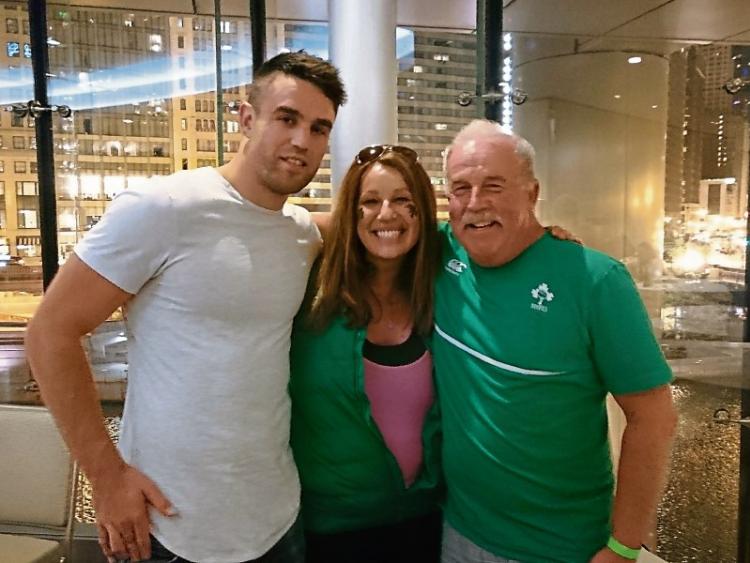 AFTER setting fire to the history books on Saturday night in Chicago Conor Murray was back in Patrickswell on Monday to get wood for the stove!

Within hours of  touching down at Dublin Airport following his flawless performance at Soldier Field, the number nine was back home in Limerick meeting up with friends, doing the usual household bits and bobs – like collecting wood from his parents’ house - and getting his mind and body focused for Saturday’s encounter with Canada and Part II of the All Blacks adventure.

“He needs some timber for his stove so he is coming out to me in a while to pick up the timber,” said his dad Gerry on Monday afternoon.

Gerry, who was once a cameraman on the Tour de France, made his first trip to Chicago for the All Blacks game, thanks to a last minute Aer Lingus flight.

He was in the stand at Soldier Field Stadium to witness what he accepts was his son’s best game ever - a game which has cemented his status as the best scrum-half in the world.

“I am going to have to watch it on TV to see how good it was because even though I had good view, you don’t see all the moves when you are up in the stand,” he explained.

“Everybody is saying to me.. (about Conor’s superb performance), Brian O’Driscoll said it to me and players on the team said it to me, so if they are telling me that, I think he must have had. It’s a team game though.”

While he was cautious about being overconfident, Gerry had an inkling deep down in his gut that this team had the wherewithal to mount a serious challenge against the mighty All Blacks and perhaps even beat them.

“They proved how determined they were and didn’t give them a minute to move.”

In the lead up to the game, Gerry did get a sense that Conor was on top form.

“There was a question of a slight underlying injury but if he had missed it, it would have been the biggest shame ever,” he added.

“Conor can just make decisions on the pitch.  He is so sharp, even if you watch him around the scrum, he is always watching where everybody is. It is all down to Joe Schmidt - he is just a brilliant coach - a brilliant coach,” he emphasised.

Following the game, Gerry got to meet up with Conor at the team hotel, Trump Towers.

“The IRFU had the team room set out with buckets of iced beer and wine and all the families got to meet the players. It was brilliant that we were able to go into a room and sit down and have a chat.

“Conor realises the significance of it all but he doesn’t jump around the place, he sees it as, he did what he was supposed to do. I don’t think he will realise for years what he has achieved, with a Lions victory, two Six Nations and getting over that big jinx and being on a team that beat New Zealand.”

As a reward for his fine performance, Joe Schmidt gave Conor Tuesday off  which enabled him to come home to Limerick.

“I just left him,” Gerry continued. “We are only home half an hour. We just had a bowl of soup in town and Keith (Earls, out due to suspension)came in - he was going up to the training camp. Conor said straight away he just feels so bad for someone to miss out like that.”

Saturday’s historic win was a real global affair for the Murray family – while Conor and Gerry were in Chicago, Conor’s mum Barbara and sister Sarah watched the action at Castletroy Golf Club (due to not having eir Sport at home)  and his other sister Aisling tuned in from Australia. “She was trying to stream it on her computer,” smiled Gerry.

While Gerry is chuffed to bits with Conor’s success, he ended the interview with the lines: “We have to remember that while it is a huge achievement and has brought huge satisfaction, it is only a game. There are many other serious issues going on in the world.”