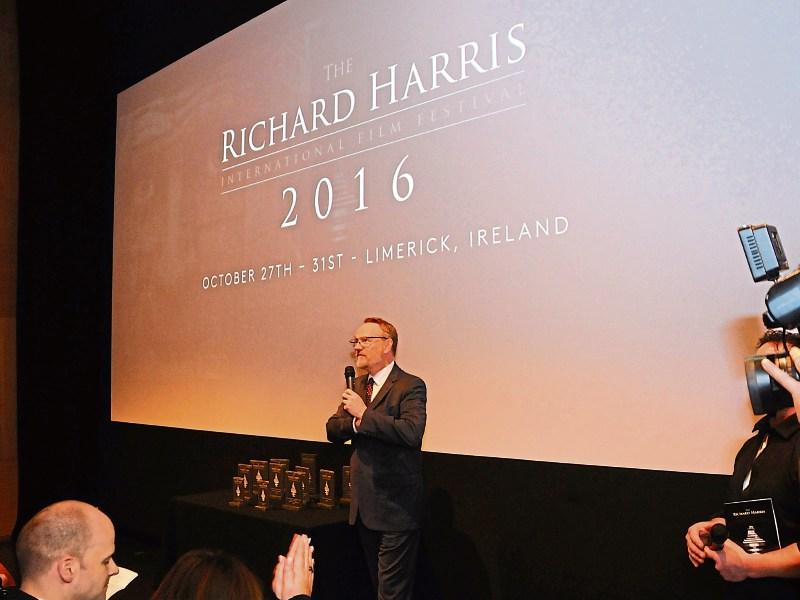 Jared Harris addresses the audience in the Belltable

THE RICHARD Harris International Film Festival will strengthen its arts and culture presence in the future, following the success of this year’s events, organisers have said.

For five days last week, a coterie of artistic talent travelled to Limerick city to admire and critique local and national film, in the Belltable and Lime Tree Theatre, at the fourth annual festival.

Reflecting on the festival, organiser Zeb Moore said that he was “thrilled” with the outcome.

“Our ambitions for the festival are significantly high, and that is why the city embraces this, because it is going to be one of those festivals that people will travel to from around the world.

Jared Harris said the festival will continue to embrace his father’s spirit.

“And also in terms of celebrating talent which he cared about. He gave a lot of opportunities to new filmmakers, young filmmakers, he had a lot of collaborations with directors.”

He added that RHIFF is “good for Limerick” and that festivals bring financial rewards to the towns in which they are based.

Webb and Harris became close friends in the late 60s, and kept in touch through the years.  Other hits on the night included Highwayman; Glen Campbell’s Wichita Lineman; Fifth Dimension’s Up, Up and Away, and many more.

Before performing MacArthur Park, Webb told the audience that Richard Harris fell in love with the piece when it was first played to him, despite being ignored by other artists.

“He slammed his hand on the piano and said: ‘Stop, Jimmy Webb. I will make a huge hit out of that. With my mighty voice’,” he said, to applause and laughter.

Near the end of the concert, Webb called the cultural icon “the big brother I never had. You can bet that Richard is up there, beyond those lights, looking down on this stage.”

Speaking to the Limerick Leader after the concert, Harris’ granddaughter Ella Harris said that the last time she saw Webb perform MacArthur Park was at Harris’ memorial event in 2003.

“I was only 13 then, but this time I am really hearing it. It was just spine-tingling, that melody in MacArthur Park. It gets me every time. His personality is all over that song, the way that it’s emotional, it’s so him, it screams him. I still didn’t realise how far back their relationship went as well, and it was so nice to hear.”

Over the weekend, 70 films were screened. Darrell Roodt was presented the best feature film award, Elaine Kennedy was awarded the best short film accolade, while local director, Steve Hall was awarded the Newport Beach Competition prize for his short, Day Off.

The award qualifies Hall to attend the Newport Beach Festival in Los Angeles, next year.

Day Off was also written by Norwood Park writer, Peter McNamara. Mr Hall said that he was “in shock” when he won. This is such a massive honour and an incredible chance to represent Limerick on the world stage.”

Kileely filmmaker, Jason Reddan, who won the special recognition award, said that Richard Harris was an inspiration growing up.

“It inspires me to think a man from Limerick who went to watch movies in the same cinema I used to go to [the Savoy] as a kid, had started his career from the same place I was from, here in Limerick.”

The annual Richard Harris monologue competition, sponsored by the Limerick School of Acting, was won by Owen Mulhall.