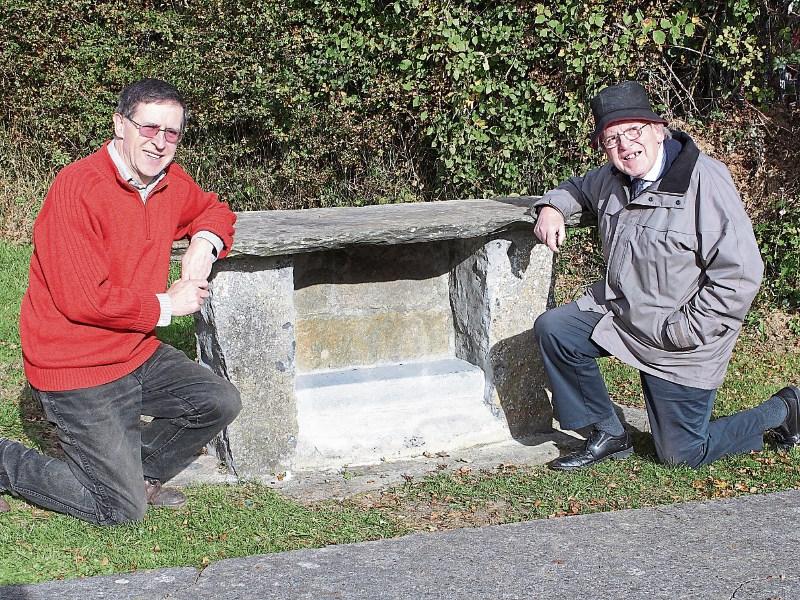 Liam O'Mahony, left, and Pat Dalton pictured at the altar stone from where the statue was taken

THE members of the Newcastle West Famine Graveyard committee remain puzzled this week following the disappearance of a statue of the Holy Family from the historic burial site.

The statue was carefully removed from its secure position behind reinforced glass about ten days ago. And, according to Liam O’Mahony,  the secretary of the small, voluntary committee which oversees the maintenance of the historic burial site: “We haven’t heard a word since.”

“We are relieved that the statue wasn’t vandalised,” he continued. But they remain at a loss as to what lay behind the theft.

The statue, he explained, was donated by a family in the town following an incident some years ago when other statues in the graveyard were smashed.

In order to prevent a repeat of that destruction, the graveyard committee decided to make the new donation secure it by placing it behind a reinforced glass screen.

“But somebody screwed off the glass, put it to one side and left it there and took the statue,” Mr O’Mahony said.

The theft was discovered by TÚS workers who were carrying out maintenance at the graveyard.

The matter was reported to the gardai but, so far, nothing has emerged to throw any light on the incident.

“It wasn’t a very rare statue but somebody just took it, ” Mr O’Mahony explained. However,  its disappearance has upset people.

The graveyard holds a special place in the hearts of local people, according to Mr O’Mahony. It came into use as a graveyard for the Newcastle West workhouse and many victims of the Great Famine of 1845-49 were buried there. A stone statue was erected there in the 1860s, paid for by the then Earl of Devon.

But the graveyard continued in use up to the 1960s as a burial place for the poor and destitute.

By the  late 1980s, the graveyard had fallen into disrepair and a voluntary committee was formed to restore it, out of respect for those buried there in difficult circumstances.

The volunteers continue to oversee the maintenance of this historic graveyard.