Watch: Facility is 'a great news story for Limerick' 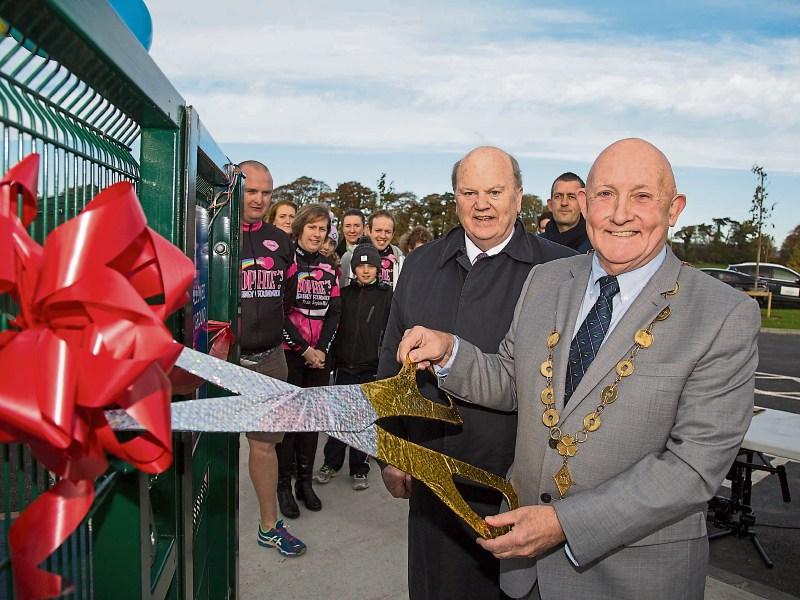 A NEW playground and exercise trail, nestled in the lush green fields at the foot of Mungret College, has been officially opened and hailed the ‘Phoenix Park of Limerick’.

The ribbon on Mungret Park’s gate was cut by Minister for Finance Michael Noonan and Mayor of Limerick City and County Council, Cllr Kieran O’Hanlon, this Tuesday, with several local politicians and members of the public also in attendance.

“This playground is a great facility and you can see hundreds of kids here at the weekends in particular, and after school when the evenings were long,” said Minister Noonan.

The cabinet minister was in high spirits as he walked among the dozens of children at play, speaking optimistically about plans for the area.

“It’s a great news story for Limerick, and in years to come people will remember today as the official opening of the new Phoenix Park for Limerick at the west of the city,” he said.

The 3,000 square metre playground has been in use for several months, as have the surrounding paths for walking and cycling, but the newly installed adult exercise machines and park benches lining the route, were also unveiled at the occasion.

“We know since the playground opened in August that it has attracted thousands of children of all abilities,” said Mayor O’Hanlon.

“I hope the children enjoy themselves with this new amenity here, and I have no doubt that thousands of people across the city and county will come in here and have some wonderful days of pleasure and exercise,” he added.

Limerick's Cycle 4 Sick Children and Sophie’s Journey Foundation were among those thanked in the mayor’s speech. The organisations raised around €10,000 to “kit out the playground with some special features” which have been designed specifically for children of different abilities.

The new facilities are just the start of a major development on the grounds of Mungret College, with plans for new schools also in the pipeline.

“Very often we are opening things at the end of a process, but this is just the start of the development of a massive area of land, almost 200 acres,” said Minister Noonan.

“There are sites now for two primary schools — a gaelscoil and a project school — and there’s a field designated as well for a secondary school, and they’ve also sold land on to Mungret GAA club to give them additional facilities,” added the minister.