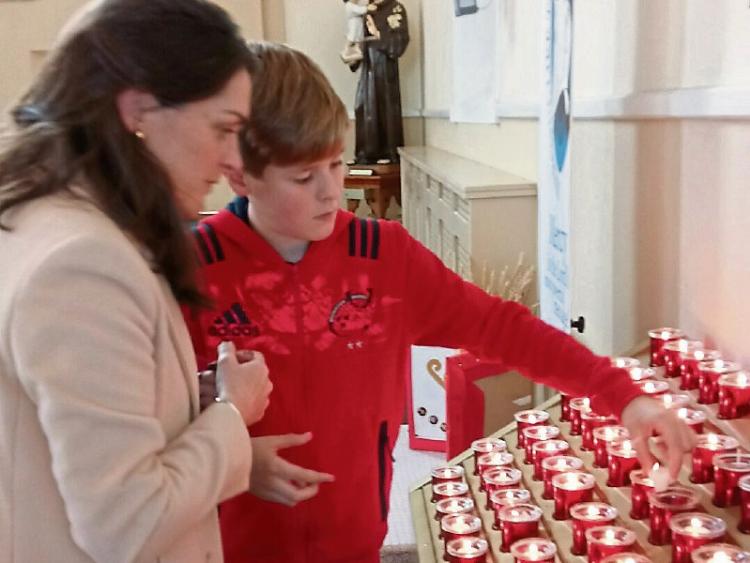 MUNSTER legend Anthony Foley’s young son, Tony, lit a special candle in memory of his dad as crowds flocked to churches in Killaloe and beyond in response to the campaign to have departed loved ones remembered.

Axel’s 11-year-old son officially kicked-off the #8Masses4no8 campaign, by lighting his own special candle with his mother, Olive after Mass at St Flannan’s Church on Sunday.

Sunday also marked the 43rd birthday of Axel, who once held the No 8 Munster jersey, and is regarded as one of most successful No 8 players in the history of the club.

Tony came up with the campaign idea last weekend following the outpouring of support on his father’s passing on October 16.

Tony, to honour his father’s memory, had asked people to go to Mass this Sunday and each of the next seven Sundays to remember their loved ones.

The Facebook campaign on the Axel Foley Memorial page has garnered massive traction over the past week since it was launched, triggering more than 250,000 engagements online.

The weekend has seen huge numbers of candles lit in support of the campaign in churches and homes around the world, with huge numbers posting photos on Facebook with thoughts of their own loved ones as well as of Anthony Foley.

A family representative said the response to the campaign has been “incredible”.

“Tony came up with this idea to try and have others included with all those thoughts and prayers for his father and it has worked. It’s heart-warming to see the Church so full today.

“We’ve got messages from all over the world over recent days.  What has heartened the most is the number of people who have gone to Masses or dropped into Churches to light a candle for their own loved ones, not just Anthony.

“Tony himself is thrilled with the response.  None of us could have expected his idea to have caught on like this.  And some people who travelled for half an hour or more said they are coming back here again next Sunday.”

Noting the crowds, Fr Paddy McMahon said,  “I know many of you may be here today because of young Tony Foley’s invitation but I would say to you don’t come for the eight Sundays, stay coming beyond that. We’d love to have you here every Sunday.”