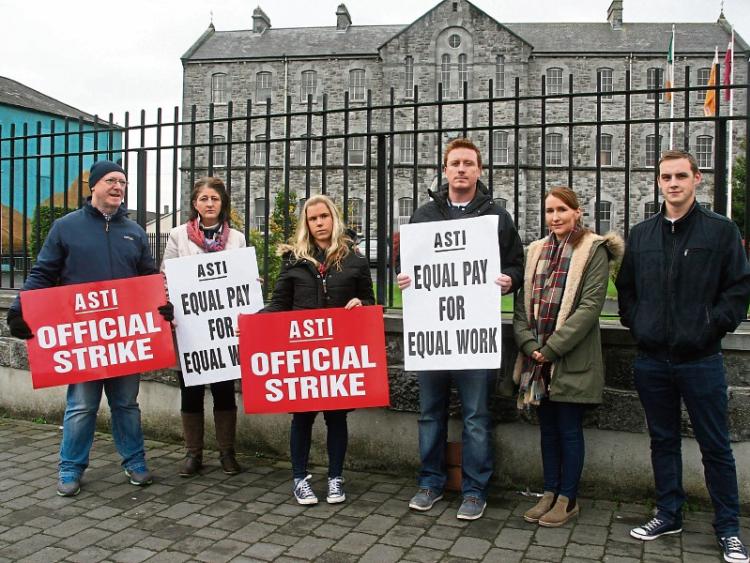 TALKS are set to resume later this week in an effort to prevent further industrial action by secondary school teachers.

The majority of secondary schools across Limerick were closed last Thursday as members of the ASTI took to the picket lines in a row over pay parity for younger qualified teachers.

“I suppose none of us want to be out here and it’s kind of a case that if you have people in the same staff room doing the same work and getting different rates of pay we feel there is something inherently wrong with that,” said teacher Declan Crotty who was on the picket lines outside CBS Sexton Street.

“I’d rather be inside in the classroom because we all have very busy agendas and we have courses to teach but we just feel it’s a very important issue,” he added.

”I don’t want to be here at all, I would much prefer to be inside teaching and I’m a bit embarrassed to be out here,” she said.

Her colleague, Mary Shee, said pay parity is something which she feels strongly about.

“I’m a senior teacher so am actually here protesting about the right of junior colleagues to be paid equal pay for equal work that’s our key issue and is one of things, as a trade-unionist, that anybody would say you have to stand for,” said Mary who teaches English.

While last week’s stike action was related to a dispute over pay-parity, members of the ASTI are set with withdraw from supervision and substitution duties from next Monday – which could see schools closed again.

Individual schools, which also employ members of the TUI,  have been working on contingency plans ahead of next’s weeks action while vacancies for ‘supervision posts’ were advertised in national press last month.

Talks between union officials and the Department of Educations and Skills resumed on Friday and it is expected that further talks will take place this week.

Meanwhile, contingency plans are being finalised ahead of industrial action by gardai this Friday. Members of the GRA voted to withdraw their labour for 24 hours from 7am.

Members of the AGSI, who engaged in a work-to-rule last Friday, will also withdraw their labour – leaving just a handful of senior officers to police the Limerick division.