'Every parent's worst nightmare became a reality': fundraiser for toddler 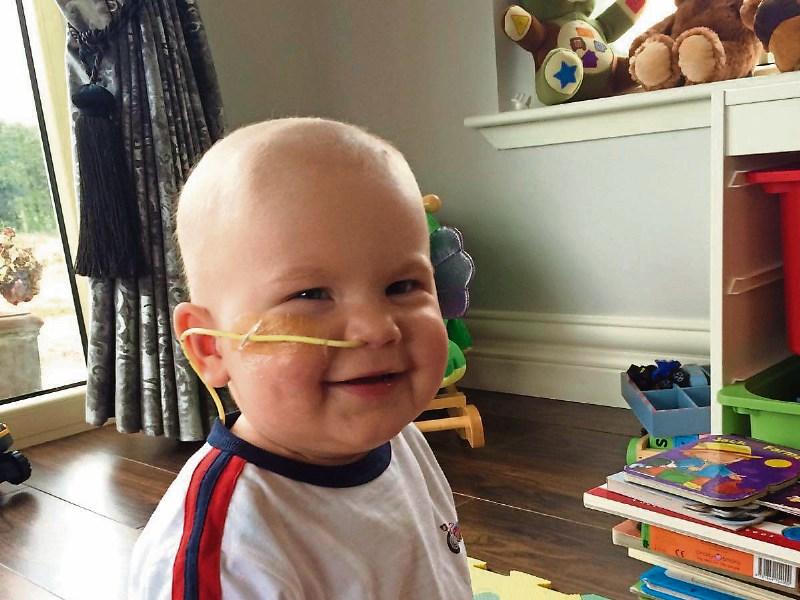 Smililng through it all: Brave little Evan Jones is still a happy and carefree child despite all he has had to endure

THE PARENTS of a happy go lucky 20-month-old boy have had their lives turned upside down overnight.

Paddy and Marisa Jones, from Newport, noticed a droopy eyelid and wheezy chest in their beloved son Evan.

They took him to Limerick Doc on a Saturday morning in July and were referred to University Hospital Limerick for a second opinion. Every parent’s worst nightmare became a reality when it was confirmed that Evan had a large tumour growing in his neck which was compressing his airway. This was what was causing him to wheeze and it was also pushing on a nerve which had caused his eyelid to droop.

Little Evan was rushed to Our Lady’s Children’s Hospital, Crumlin minutes after the diagnosis in Limerick.

Upon consultation with the oncology team, Evan’s parents learned the devastating news that he was in a critical condition due to the location of the tumour.  His airway was now 2mm in size and as a result the doctors felt that it was too risky to operate at this point so Evan was immediately put on chemotherapy. Paddy and Marisa moved to Dublin with the support of the Ronald McDonald house to be by his side.

Unfortunately as the chemotherapy did not reduce the tumour as was hoped, the team decided that a high risk operation to remove it was now the only option for little Evan. After a long, harrowing nine hour operation the tumour was successfully removed to the delight of his parents and his new four-week-old baby brother Ben.

But the happiness was short-lived as the biopsy result confirmed that Evan had a malignant Rhabdoid tumour, which is a very aggressive and very rare form of cancer that is mainly found in children under two. The treatment is a course of intensive chemotherapy and radiation and a stem cell transplant may also be required. Evan will be treated in Dublin but he may have to travel to Germany for further treatment.

The Team Evan Jones committee was formed to help him on his journey. Principal of Castleconnell National School, Richie Ryan is one of those who have worked tirelessly to organise a 5k run and walk this Bank Holiday Monday at noon – registration from 10am at Newport Community Centre. And on Saturday, November 5 a huge benefit night and auction in the community centre.

“Brave little Evan is still a happy and carefree child despite all he has been through. This has given his wonderful parents Paddy and Marisa the strength to remain determined and positive to fight this aggressive cancer and get their little boy back to full health. The family have a long road ahead of them and are taking it step by step. Evan will require a lot of treatment over the coming months and there will be travel, relocation and home support required during this journey.

“Friends of Paddy and Marisa along with the community of Newport are holding a fundraising campaign for Evan. The campaign is called Team Evan Jones and our community is fully behind and supporting it. We ask you to join us and support Evan and his family on this difficult journey,” said Richie.

Donations or sponsorship can be given via a charity page https://www.gofundme.com/teamevanjones or given directly to an account in the Mulcair Credit Union in Newport - account name is Team Evan Jones.

Bank Holiday Monday’s family fun run and walk has a Halloween theme with prizes for the best dressed and a barbecue afterwards.

While the following Saturday’s benefit night has a fantastic array of lots that include signed Munster and Celtic jerseys, one signed by Paul O’Connell and even a heifer.

See the Team Evan Jones Facebook page for more information on how you can help.