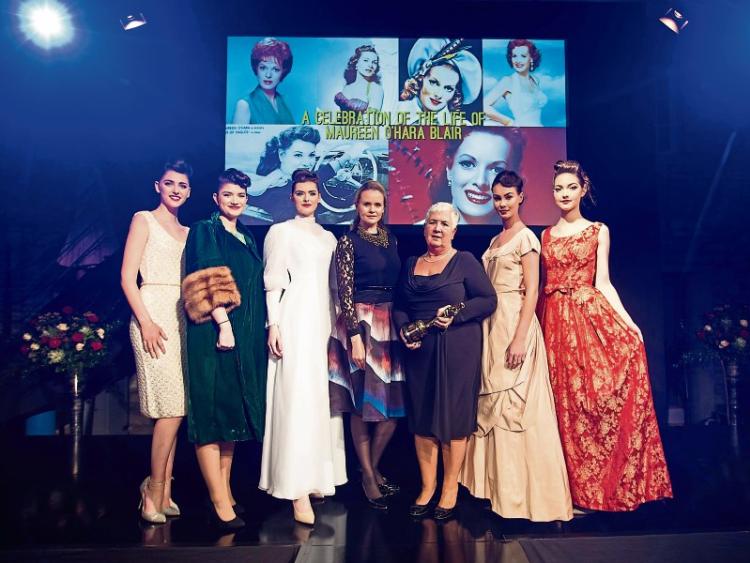 SCORES of people got to achieve the impossible dream in Foynes last Sunday night, when they were photographed holding aloft an Oscar.

The Oscar statuette, more beautiful in reality than it appears on screen and surprisingly heavy, was that won by Maureen O’Hara, awarded to her for her Lifetime Achievement in motion pictures in 200.

It was just one of a large number of awards and other memorabilia donated to the Foynes Flying Boat and Maritime Museum following Ms O’Hara’s death last year.

But the Oscar was not the only piece of Hollywood’s magic dust to be felt in Foynes, where Maureen O’Hara’s life and work  were being celebrated on the first anniversary of her death.

Hollywood glamour swept up the audience as  gowns, dresses and coats, designed for Ms O’Hara and worn by  her  in her various films or at public events,  were seen on an Irish catwalk for the very first time.

But the stunning garments, beautifully designed and made from the most resplendent fabrics, were only a small part of Ms O’Hara’s legacy generously donated to the museum by her grandson.

According to museum director, Margaret O’Shaughnessy, what people were seeing was only a small part of one container and three containers in all will make their way to Foynes where the plan is to open a new wing to exhibit them.

Minister for State for Tourism, Patrick O’Donovan, said such an exhibition would “add substantially to the tourist product, not just in West Limerick but throughout the region.”

“Tonight is a new journey for this museum, a new venture,” he said, officially launching Sunday’s commemorative event which began with Mass and was followed by the fashion show which also included film clips starring Maureen O’Hara and live music and songs associated with her films.

“Margaret has organised many ventures,” the minister quipped, “but it is the first time she has asked me to open a fashion show.”

Minister O’Donovan also revealed that the new Maureen O’Hara wing was just one part of a big extension plan for the museum which would ultimately also cater for every type of transport, including sea, air, rail, bus and car.

And he paid tribute to Maureen O’Hara, “an icon for millions”, who graced the screen and stage for many years but who never forgot her Irish roots, and where she came from.

Ms O’Shaughnessy, in her tribute, recalled her very first telephone call to Maureen O’Hara in 1988, asking for her help to set up a flying boat museum. “I was terrified. I rang her and her response was. Don’t think, Do it. She agreed to come on board and to do everything possible to help and she did that.”

Maureen O’Hara became a patron of the museum and visited Foynes almost every year between 1989 and her death last year.

Ms O’Shaughnessy also paid tribute to the generosity of Maureen O’Hara’s grandson, Conor Beau. “He knows we genuinely love her and we will do everything possible to make sure she isn’t forgotten,” she ended.

Mr Beau’s generosity is all the more telling given that auctioneers Bonhams will conduct a sale of items from Ms O’Hara’s estate on November 29 in New York, with many lots involving gowns, jewellery, gloves and handbags owned by her. The lots range in price from $200 to over $100,000 with $120,000 the guide price on the trap used in The Quiet Man.

RTE regional correspondent  Cathy O’Halloran, in her tribute, recalled Maureen’s melodic voice and her consummate professionalism in front of any camera while it fell to MC Seamus Hennessy to knit together seamlessly the different elements of the evening before a capacity audience.