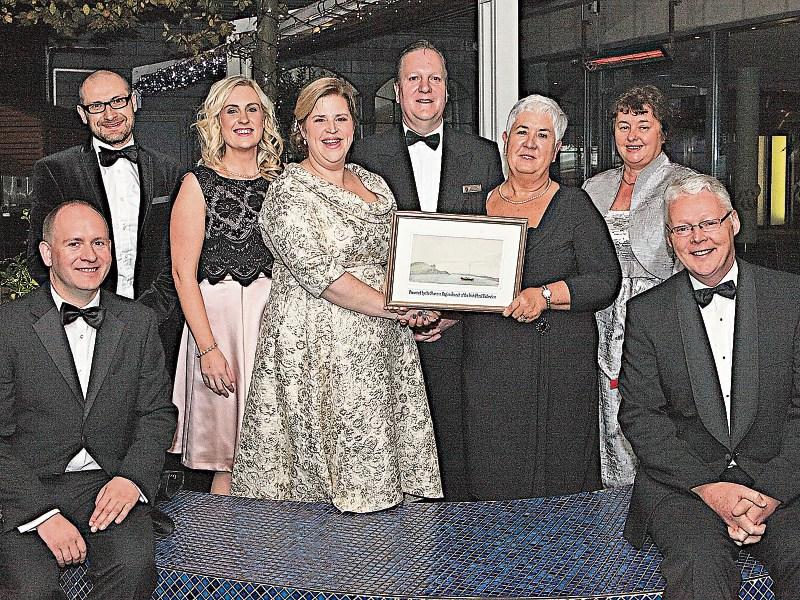 A WOMAN described as “a dynamo for tourism” in the Mid-West region was honoured this week by her peers in the industry.

At the Mid-West Tourism Ball, Margaret O’Shaughnessy, director of the Foynes Flying Boat and Maritime Museum, was presented with a special award for services to tourism in the region.

The event was attended by over 440 guests from across the industry from Limerick and Clare with special guest, the Junior Minister for Tourism and Sport, Patrick O’Donovan.

Speaking at the event, Mr O’Donovan said Ms O’Shaughnessy deserved to be honoured for what she had achieved with the Flying Boat museum.

“She essentially built a tourist and visitor attraction from nothing and she took the heritage of the first Shannon airport in the port of Foynes and with a really dedicated board, she set out on a journey which has seen the museum now attract in excess of 60,000 visitors a year,” he said.

Elaina Fitzgerald, chairperson of the Shannon Region branch of the Irish Hotels Federation, said the award was long overdue. “She is a fantastic ambassador for tourism in this region,” she said.

Ms Fitzgerald pointed out that tourism was one of Ireland’s largest indigenous industries, with visitor numbers up 13% so far this year.

“Tourism makes a crucial contribution to Limerick city and county, supporting 7,000 jobs and generating €243 million annually for the local economy,” she said.

“It is clear from these statistics that tourism acts as a strong engine for economic growth and job creation both nationally and at a more local level.”

But she outlined a number of concerns that needed to be addressed locally, including the “urgent need” for Wild Atlantic Way driving routes around Limerick and Adare; support for and development of Shannon Airport; and the need for a motorway between Limerick and Cork.

Also addressing the gathering, the head of the Irish Hotels Federation, Joe Dolan, dismissed a recent proposal to make Limerick a destination for stag and hen parties.