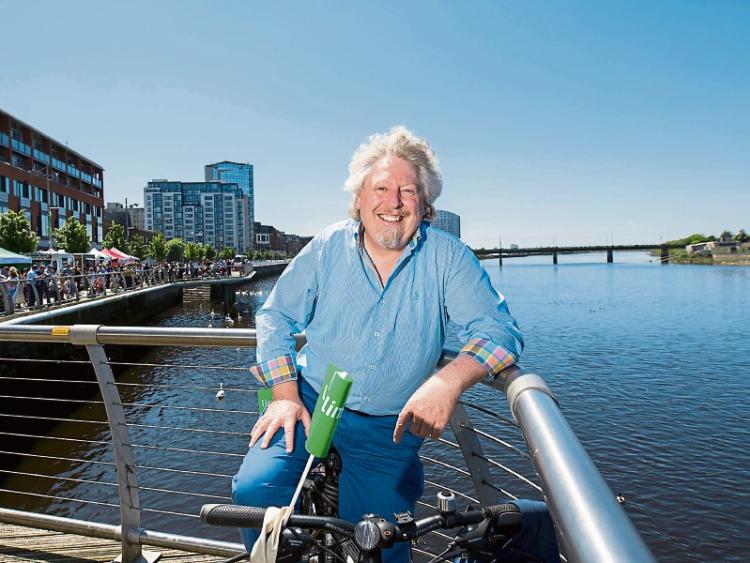 Mike Fitzpatrick prepared the plan that was put to councillors

A NEW plan is proposing to spend €12m over five years on culture in Limerick, creating a new cultural division within the local authority in the process.

The draft briefing document - Limerick, Culture Capacity and the Way Forward - has been presented to councillors in recent days.

Seen by the Limerick Leader, it proposes “maintaining a commitment to funding, similar to that within the (Limerick 2020) bid budget, for a total of €4m, spread over the next five years”. It also seeks an allocation of €600,000 in the council’s 2017 budget to “enable cultural capacity building”

Another €4m would be sought from commercial sponsorship and philanthropy, matched by funds from central Government and national agency funding, making a total of €12m to be spent up to 2021.

The document, prepared by Mike Fitzpatrick and Sheila Deegan and also presented to a number of key figures in the artistic community in Limerick late last week, outlines a five point plan of strategic priorities over the five year period.

A number of cultural highlights are promised for delivery, including elements of the 2020 bid - Lifting the Siege, a beefed up Eva International, a Royal de Luxe show, the Fleadh Cheoil in 2020 and 2021 and the HearSay International Audio arts festival in Kilfinane.

The document proposes to “build on current successes to deliver a cultural programme of international significance and attractiveness and make Limerick a hub”, the “development of a capacity building programme for the creative and cultural sectors”, developing “cultural tourism”, an “ambitious and integrated cultural agenda within social regeneration projects” and “the establishment of a cultural division” within the council.

This proposed division would take responsibility for “all aspects of the arts and culture portfolio” including the arts office, the culture and property portfolio, LCGA, civic festivals and other “related policy areas”.

“Appropriate appointment processes would be followed in filling the staffing complement, including open competition at division head and internal appointments and transfers”.

Councillors will be asked to sign off the plan as part of the budgetary process, with another meeting scheduled to take place in the coming days.

Asked for an official response to the draft plan, a council spokesperson said: “As part of the 2017 budgetary process, a draft proposal has been prepared in relation to developing and resourcing Limerick's cultural capacity, based on the success of 2014, the needs analysis of the sector gained through the Limerick 2020 bid process and the potential for growth of cultural tourism in Limerick city and county.

“Subject to the approval of Council as part of the budget, this provision would proceed for implementation in 2017 and would continue to enhance Limerick’s arts and cultural offering.​”

Fianna Fail councillor James Collins, said: “We are all in favour of providing more money towards the arts and culture in Limerick and promoting it, and even some of our discretionary money has been allocated towards it by local councillors.

“But what we want to make sure is that the money is spent in the right way. We want a clearly defined programme of events that will take place. And if there is to be a proposed change of structure, that it is agreed in advance with the councillors. If we are going to provide extra funding, we want to make sure that it is spent in the best possible way.”

Some concern about the draft plan was expressed by members of PLAN – the Professional Limerick Artists Network – and LACE – Limerick Arts and Culture Exchange – who said the detail in the document had not been officially relayed to either organisation.

Monica Spencer, a member of both groups, said: “Everybody would absolutely love for the budget to be increased, but we would also like to have some kind of public forum and discussion as to how and where that extra increase would be invested.

“Naturally there would be disagreements between people about that, but I think it would be very healthy to bring that into the public sphere and let not just the arts community, but the public know about it.”

Louise Donlon of the Lime Tree Theatre, said the draft plan had the potential to be a “lightbulb moment” for the council.

“It is one that has been coming on for a while, because they have seen the great benefits that 2014 brought and they see the feel good factor that arts and culture can bring to a city,” she said.

“This proposal, that is coming from the local authority, is to be hugely welcomed, if the councillors agree to it.

“I think it is game changer for the arts and culture in Limerick and it really will make a very significant difference to artists in the city and county.”