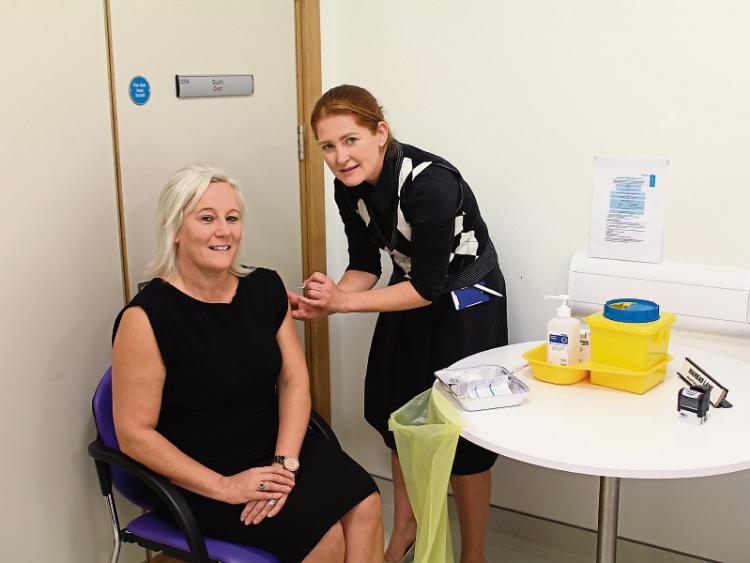 STAFF at Limerick hospitals are taking part in a major vaccination programme to protect patients from flu during the forthcoming winter months.

The HSE has this month launched its annual flu campaign, with at-risk groups – including the over-65s; people with long-term chronic illnesses; pregnant women and residents of nursing homes and other long-stay facilities – encouraged to get the vaccine from their family doctor or pharmacist.

UL Hospitals chief executive, Colette Cowan, following her vaccine last Thursday, said: “In 2013, Ireland was part of a major pan-European study which analysed the previous eight flu seasons. That research showed that excess mortality due to influenza was in the range 200 to 500 during most seasons in Ireland, and as high as a 1,000 during a particularly severe season.

“It goes without saying therefore that flu can be a very serious illness and represents a serious challenge to the health service. Fortunately, we have a safe and reliable vaccine to protect us from flu. And those of us working in hospitals, nursing homes and any healthcare setting have a particular responsibility to get immunised to protect vulnerable patients,” she added.

She said that the more staff who receive the vaccine, the fewer who will be absent from work due to illness, adding that it is one of the “busiest times” of the year in its hospitals.

As part of its campaign, UL Hospitals Group has nominated around 50 flu “champions” to promote the campaign messages across its sites. In addition, the Group has trained and appointed 10 peer vaccinators to give the flu shot to colleagues at additional clinics between now and Christmas.

A spokesperson for the Group said that those aged 18 years or older in the at risk groups may attend either their GP or pharmacist for vaccination, and those under 18 years should attend their GP. Vaccinations are free for those with a medical card.