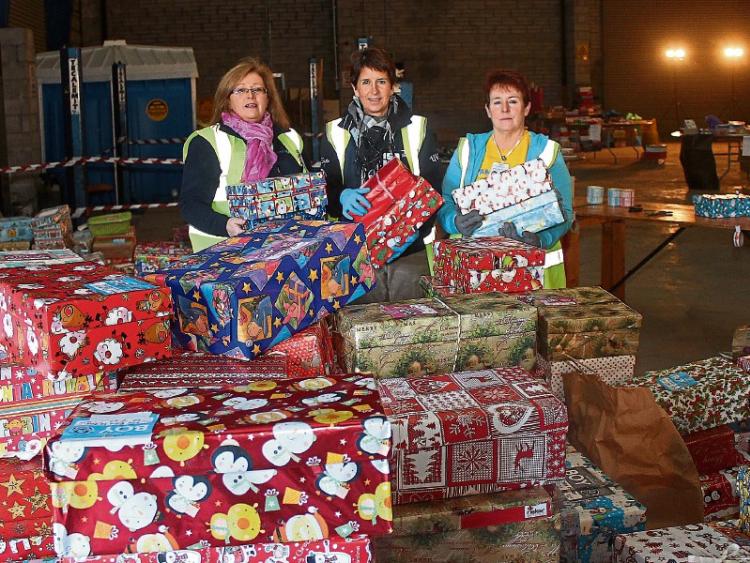 THE ORGANISERS of an annual shoebox appeal are continuing to appeal for a unit in the city, with just weeks to go before they need to be dispatched overseas.

Again this year, up to 12,000 boxes of gifts will be sent from Limerick to children in war-torn and impoverished countries in Africa and the Middle East.

Norah Collins, from Doon, one of the Team Hope Limerick organisers, told the Limerick Leader that they are appealing for a warehouse unit of 10,000 to 15,000 sq ft in the city or its outskirts, where they can organise the thousands of packages to be sent overseas.

“It’s an intensive few weeks but we all love doing it and have fantastic volunteers who turn up every year,” said Nora.

She has been volunteering for the past 15 years, alongside fellow volunteers and co-ordinators of the Limerick appeal –  Collette Toomey, from Lisnagry, and Rose Riordan, from Castleconnell.

The majority of donations come from Limerick schools, and she urged people to add a copy book and pencil for children in their packages.

Often, she said, it is the simplest items which can make the most difference for those who have so little, and especially items which can help build towards a child’s education.  All the shoeboxes need to be checked and sealed by November 18.

Shoebox appeal ambassador John McAreavey said that the appeal shows “children the importance of giving to other children less fortunate than themselves.

“Teaching the importance of selflessness and generosity at a young age is such a valuable skill and the Shoebox Appeal is a fun and impactful way for children to learn the power of sharing and giving back,” he said.