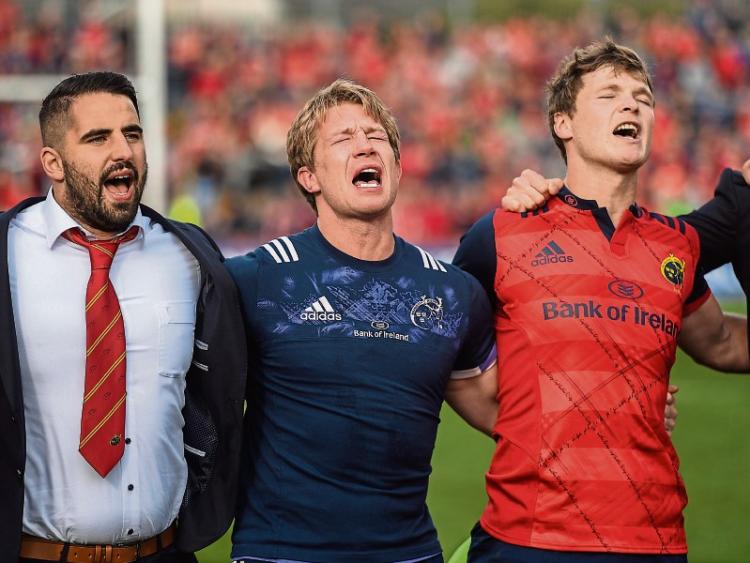 Shoulder to shoulder: Man of match Tyler Bleyendaal (right) with Jerry Flannery and Peter McCabe after the match Picture: Sportsfile

IN A HEARTFELT display of generosity and goodwill, the man of the match from Munster's victory over Glasgow has presented the family of the late Anthony Foley with his award.

Following on from playing a starring role in his first European Champions Cup game, outhalf Tyler Bleyendaal travelled to the Killaloe home of the late head coach on Sunday to make the presentation.

It is understood that the family were deeply appreciative of the kind gesture.

Bleyendaal, 26, earned the man of the match award for a flawless display in steering Munster to a 38-17 in front of a heaving Thomond Park on an emotionally charged day.

The New Zealander – who joined Munster in January 2015 – showed terrific skill to score one try and set up another, while also proving flawless from the kicking tee on the day.

Speaking to broadcaster Sky Sports after the game, Bleyendaal said it was a “tough week, but we stuck together”.

“We were there to support the family, Olive and the kids, and the community, and we knew once we got to this pitch there was going to be a lot of emotion let go. But we had a job to do and Axel would’ve wanted us to do him proud,” he said.

A full house turned out to roar on the Munster side, with poignant tributes both before and after the game. Bleyendaal made reference to the enormity of the occasion after the game.

“It’s obviously a great experience to be a part of because the support that everyone here is showing for Axel, a true legend, and for his family, there’s just so much respect and honour out there and we’re privileged to be playing for his honour,” he said.