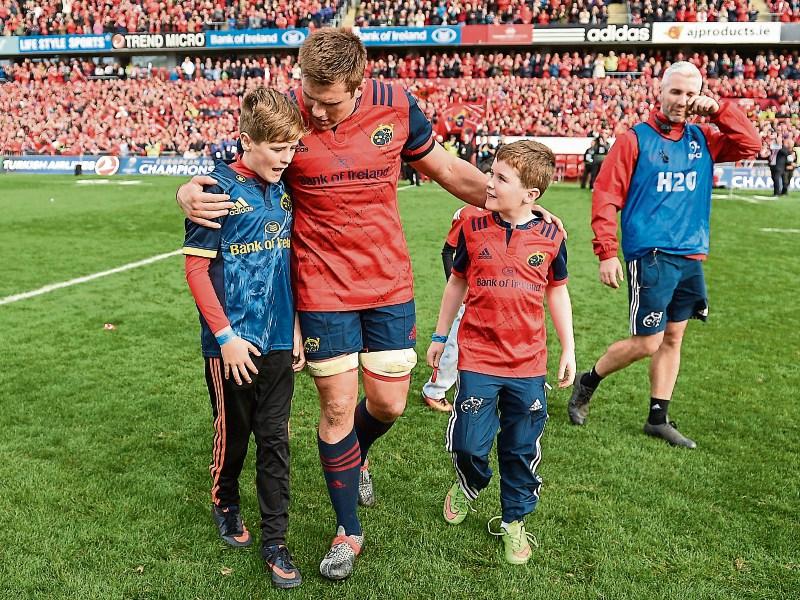 THE 11-year-old-son of the late Munster and Ireland rugby legend Anthony Foley has launched a special Facebook appeal in his father’s memory.

Just two days after being part of one Thomond Park’s all-time unforgettable moments – when he and his brother Dan, aged eight, joined with Munster players in the middle of the pitch at full-time for a poignantly charged rendition of the Munster anthem ‘Stand Up and Fight’ - Axel’s eldest son today launched a campaign to encourage people to go to Mass and pray for deceased family and friends and his Dad.

The Facebook site – Axel Foley Memorial - was launched shortly after midday and has already got huge traction.

In the campaign - #8masses4no8 - Tony is asking people to go to Mass for the next eight Sundays, starting this coming Sunday – his father’s birthday. He would have been 43.

“Tony has been busy thinking of a tribute to his Dad and has asked that this page be set up in his memory. He wants to use it to ask people, who want to show their support, to attend Mass on each of the next 8 Sundays to pray for people who have died and while there to offer a prayer for his Dad also.”

It goes on: “The Number 8 is, of course, a special number for Tony and his family but the eight Sundays also bring us up to that special family time of year, Christmas.

“So, Tony has asked if you would, in his Dad's memory, Like and Share this page. As you do that, Tag 8 Facebook friends to go to Mass over the next 8 Sundays and, at that Mass, light a candle for a loved one or, indeed, for Anthony, take a photo of that lit candle and post it to this page using #8masses4no8

“By doing this you will be bringing additional comfort to this mighty young man and his family at this time.”

The first to post on the site was Tony’s mother Olive, who confirmed it was her son’s idea and that he thought it up on Saturday night last, after returning from Thomond Park.

“Tony was inspired by what he had experienced in Thomond Park and came up with the idea of getting people to go to Mass to pray for deceased people, including his father, in the run up to Christmas. The eight week cycle is fitting as his father will, of course, forever be associated with the number 8,” a spokesperson for the family further outlined.

“It’s a lovely idea. Tony even created the hash-tag, edited the image for the page to include the hast-tag and launched the page today.

“It’s getting a huge response and he’s delighted.  It’s a really positive way of dealing with what has happened and the more people that support it the better.

“November is fast approaching, which is, of course, the month of the Holy Souls so it’s very timely also in that regard.

“The eight Sundays will take us right up to Christmas, which is a special family time, of course, but can be very difficult for families who have lost loved ones.  The support for the campaign over the coming weeks will certainly be a positive for the family at an otherwise very difficult time.”

Meanwhile, Limerick City and County Council has confirmed that –as of lunchtime this Monday – 7,567 people have signed the online book of condolence it opened in Foley’s memory.

“There has been a tremendous outpouring of grief and sorrow at the passing of the Munster Head Coach and this has been reflected in the thousands of people who have signed the books,” said a spokesperson.

Books are still open at Merchant's Quay, Dooradoyle, Kilmallock, Newcastle West and Rathkeale, as well as online here. They will close at 5pm this Friday.