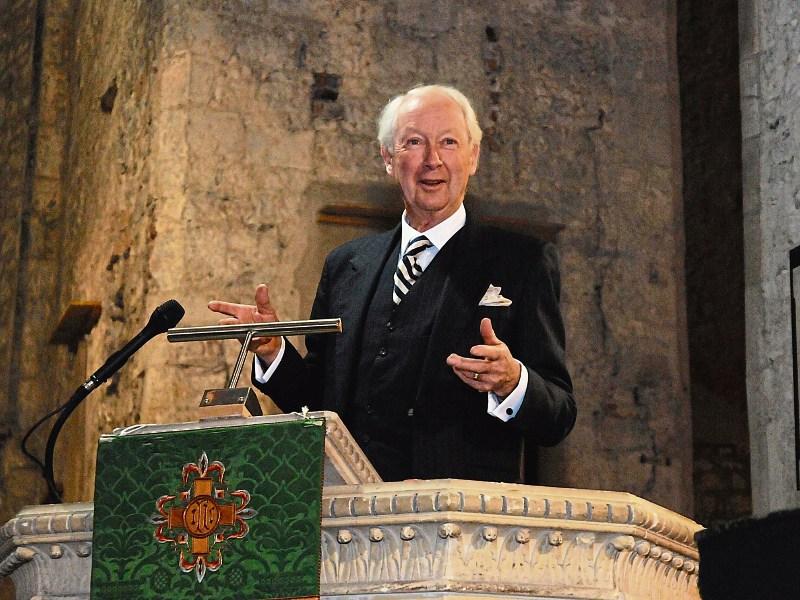 AFTER weeks of thought-provoking discussions in the Limerick Civic Trust’s autumn lecture series, the founding president of University of Limerick Dr Ed Walsh recently delivered an in-depth, hour-long talk on Ireland’s most topical issues, marking the end of the programme.

Addressing issues in third level education, Dr Walsh said that Irish universities should adopt the Danish governance model, which would see the reduction of governing authority members to 11.

He also mentioned that UCD has 41 governing authority members.

A similar model would see six of the 11 governors selected by the respective university — and each being an expert in an area suited to the institution.

Speaking to the Leader, Dr Walsh said that a change in the structure would require an amendment to the legislation, but would be done “in the stroke of a pen.

“I would imagine no one in the Oireachtas would be strongly opposed to it. It would point to Denmark in their success. We have an archaic governance system with individuals who are the salt of the Earth, I am sure, and want to get on with the job, but it’s just a cumbersome arrangement.”

Addressing healthcare in Ireland, he argued that more financing for central administrative staff could be deployed to frontline medical staff — a move, he said, which could be achieved through introd-ucing a single-integrated computer system.

He said that the Estonian health service has been able to achieve the redeployment of more frontline staff through its own national integrated computer database and the issuing of a health card which is used to store personal data.

“The prime minister of Estonia has made a decree, requiring public servants not to ask a citizen for the same information more than once. All you do is give your card — they will ask for your name and, probably, your date of birth. And there, it all pops up; all your x-rays, all your scans,” he explained.

When asked why he hasn’t entered politics, he said that it is because Ireland does not have the “list system”.

This, he said, is a system that sees half of the Parliament composed of “people from the parish pump, and the other half composed of people on a list system, who are distinguished movers and shakers, who are asked by various parties: ‘May we put you on the list?’

“If Ireland had a list system, I suspect I might have been approached by one of the parties to go on their list,” he said. When asked if he would accept such an offer, he replied: “Of course I would have said ‘yes’.”

When he was asked if the Taoiseach were to appoint him as a Minister, would he accept without pay, he said: “I would. It would be an honour to serve for five years as a Minister. But our system doesn’t permit that. And until we move to the New Zealand [list] system, it won’t permit it.”

Criticising elderly care in Ireland, Dr Walsh, 77, said that visiting an Irish nursing home is “not an encouraging experience.

“There was a time, and not so long ago, when older people lived and died in their home, with their family and friends. We now transport many of them into an alien environment for their remaining months or years. And if they are lucky, they die in a nursing home, but political correctness is requiring many of the nursing homes, if people are close to death, to move them to A&E.”

This segued onto the “difficult terrain” of euthanasia, which Dr Walsh previously discussed at a National Association of GPs conference in Limerick city earlier this year.

“The State determines how you shall die, whether in an institution or otherwise. Since 1942, Switzerland has decided that the State should not intervene, and those who are terminally ill or in great pain and really wish to die, are permitted to do so in dignity and in peace.

“All of us have had pet animals, and a time have reached when the kind thing to do is to take them to the vet. That is a horrible parallel, I know. But, I think, in a generation’s time, we will look back at this phase in Ireland and be embarrassed how we treat our elderly. Belgium, Luxemburg and, last year, Germany have entitled citizens who want to die, to die.

"Physician-assisted dying is now legal in five US states, and under consideration in most others. And it is time, and in a thoughtful way, we in Ireland consider this topic,” he said to the dozens seated in the cathedral.

Dr Walsh briefly prodded one of the most discussed topics on the nation’s agenda — the Eighth Amendment.

“All of the traditional Catholic countries in Europe have dealt with this issue, so that individual situations can make up their own mind. Eventually, the Eighth Amendment is going to be withdrawn. And probably, the sooner it is, the better.”

Dr Walsh said that Ireland’s participation in the European Union climate change programme could cost each household between €20,000 and €30,000.

He said that, according to recent estimates that he received, the climate and energy framework, which was adopted by the EU in October 2014, could cost Ireland anything between €40bn and €60bn over the next 13 years.

“We have one major problem. And that is that the cows are producing 33% of our carbon emissions. And we don’t know how to stop them. They are sacred cows, so we ain’t going to get rid of them. So, unfortunately, industry, transport, business and residential will have to carry the can in meeting our 2030 climate agenda,” he said.