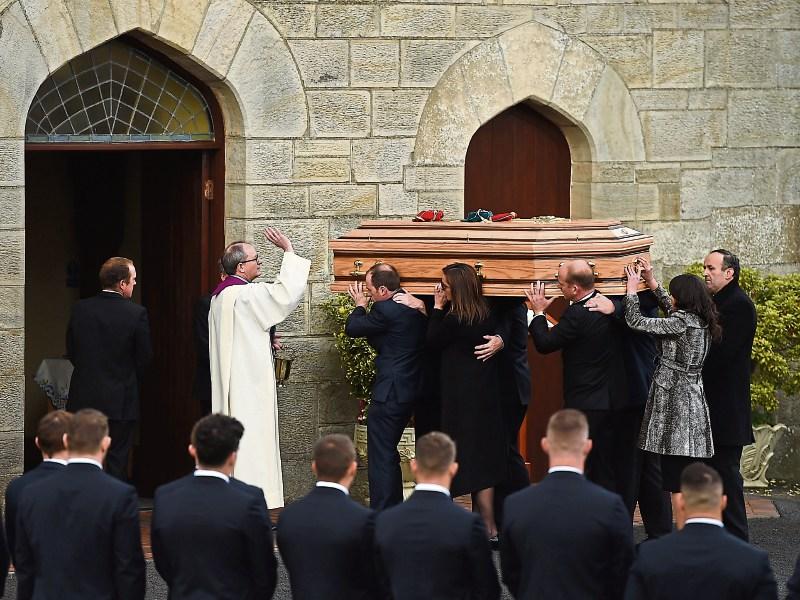 THE funeral has taken place in Killaloe of Munster head coach Anthony Foley who died suddenly in Paris last weekend.

Thousands of mourners including relatives, friends and colleagues from the world of rugby – including close friend Keith Wood, Ireland head coach Joe Schmidt and former Munster coach Declan Kidney – all attended this morning’s Funeral Mass at St Flannan’s Church in the village.

Members of the current Munster squad, who will face Glasgow Warriers in the European Champions Cup tomorrow, formed a guard of honour as the coffin carrying the remains of the 42-year-old arrived at the church shortly before midday.

In his homily, family friend, Fr Pat Malone spoke of the impact Anthony Foley had on other people throughout his life.

“Anthony ‘Axel’ Foley made many a mark in his 42 short years of life.  Just look around and see; the indelible, warm, affirming marks he left on family, friends, colleagues, sports fans, this local community, rugby wherever it is spoken of – to name but a few,” he said adding that he has many fond memories of his own.

“My first, and I believe my longest lasting, memory of Anthony is and will be as a family man. His family meant all to him. Olive, you were his true love, and how good ye were together.  One could sense the strength of your relationship, the warmth of your love for each other, and the ways you supported each other through the easy as well as the difficult moments of life. Ye complimented each other so well, Ying and Yang in perfect balance with each other,” he told mourners.

Anthony Foley, who is survived by his wife Olive and sons Tony and Dan was laid to rest at Relig Núa Cemetery, Killaloe.