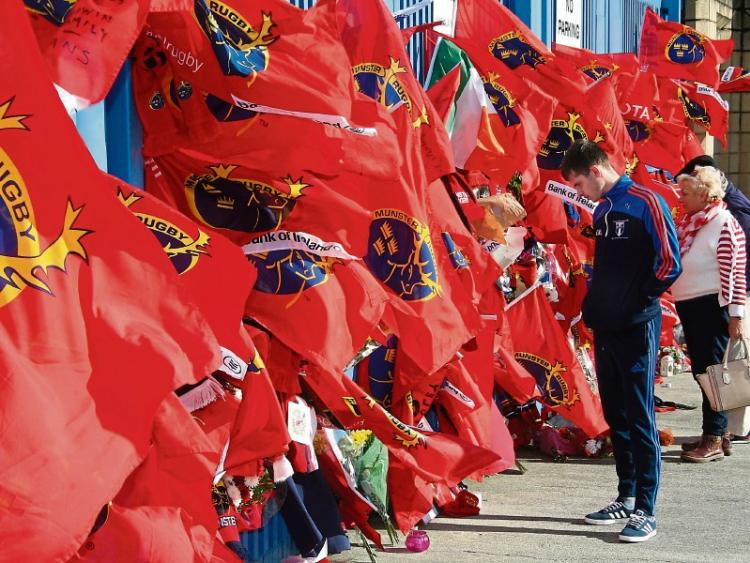 People in their droves have made pilgrimage to Thomond Park to leave tributes to Anthony Foley Pictures: Adrian Butler

TRIBUTES to Anthony Foley are continuing to pile up at Thomond Park, with supporters gathering to channel their grief at the legend’s shock passing.

Munster’s spiritual home has become a beacon for fans since news of Foley’s devastating and sudden death on Sunday became known.

People across all codes and allegiances have gravitated toward the main gate into the ground, where - fittingly at the Shannon RFC entrance – floral tributes, jerseys and flags have been left in memory of Foley. 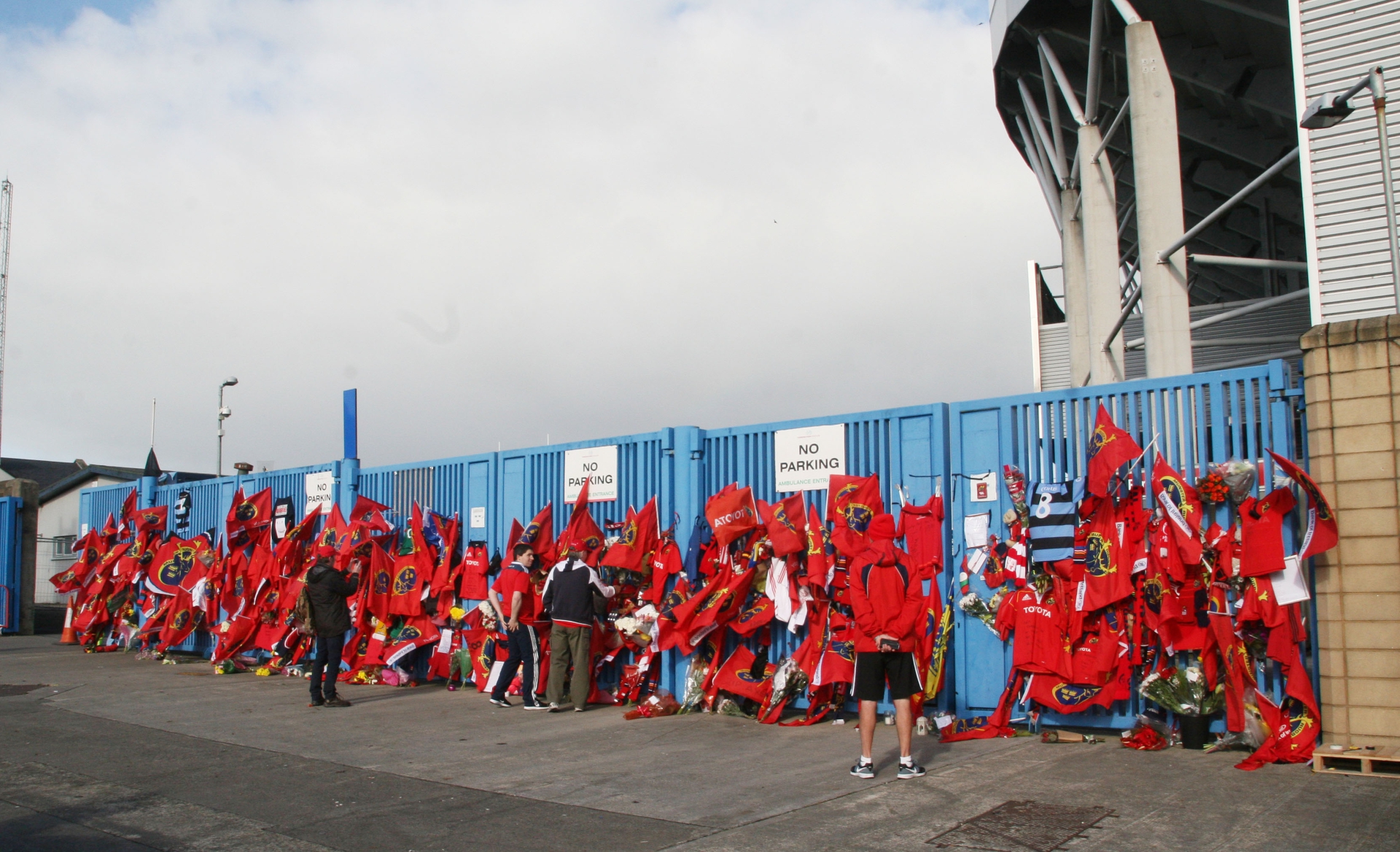 Standing outside the stadium gate this Tuesday, now emblazoned in Munster red, Ballynanty man Martin Franklin said that the Munster and Irish rugby hero “will be sadly missed”.

“It is a total shock for a fit man to go so young. I remember being in Dublin watching Anthony scoring tries for Ireland and for Munster, and in 2006 when Munster won the Heineken Cup he was there to lift it,” he said.

With Munster’s match against Edinburgh on Saturday lunchtime expected to go ahead, a source inside Thomond Park said that the tributes would be put in an appropriate location inside the ground when the gates open, and would be “treated with the utmost respect”.

Fond memories of Foley are continuing to be recounted across Limerick, with chip shop owner Luigi Orlandi remembering Foley and Paul O’Connell coming into his shop with the Heineken Cup in 2006.

A framed photo of Luigi and Anthony pictured together with the European Cup now adorns the premises, alongside photos of Richard Harris and other famous people who walked through its doors. 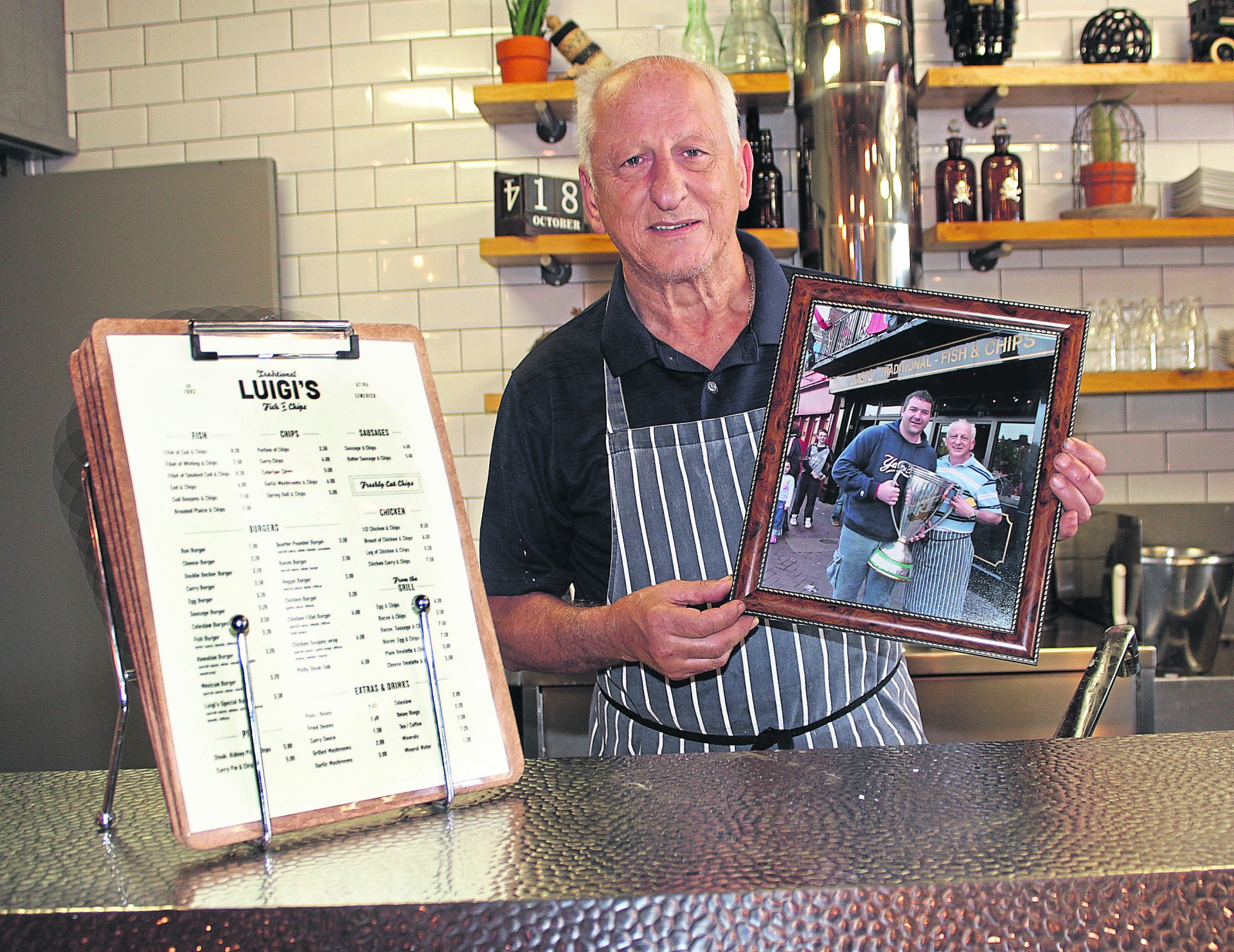 "He and Paul O'Connell were passing by, going down to Austin's [pub] and they stopped here. He asked me to mind the Cup for a while, while they were going for a drink. They came back and took photos with everyone eating chips here,” he remembered.

“They came back and took photos with everyone eating chips here. I phoned my son who was in the Tutorial [College] and told him I'd the Cup up here. He said 'There's no way, I don't believe it.' I said 'Anthony Foley is after bringing it in. All the kids came up to see the Cup,” laughed Luigi.

“They were drinking in Charlie St George's and Austin's. They all used to go there before they became so well known. Paul O'Connell often used to come here for a big order for the lads and bring it over to Austin's.”

Luigi said he heard the sad news about Foley’s passing on the radio on Sunday.

“I was out Sunday morning to play golf and heard it on the radio. I didn't believe it. It's so sad. Unbelievable really. I couldn't believe that he was 42. He seems like he had been around for a long time; it seems like a lifetime,” he said.

“I was playing golf one time in Ballyclough and I was on the 13th hole, and a ball came towards me and nobody shouted 'Fore'. Anthony Foley walked all the way up to me and said 'Sorry about that Luigi', even though it wasn't him, it was someone else who hit the ball."

Munster have confirmed that the squad is “working and planning” towards Saturday's Champions Cup encounter with Glasgow at Thomond, which is due to kick off at 1pm.

Funeral arrangements are yet to be finalised.