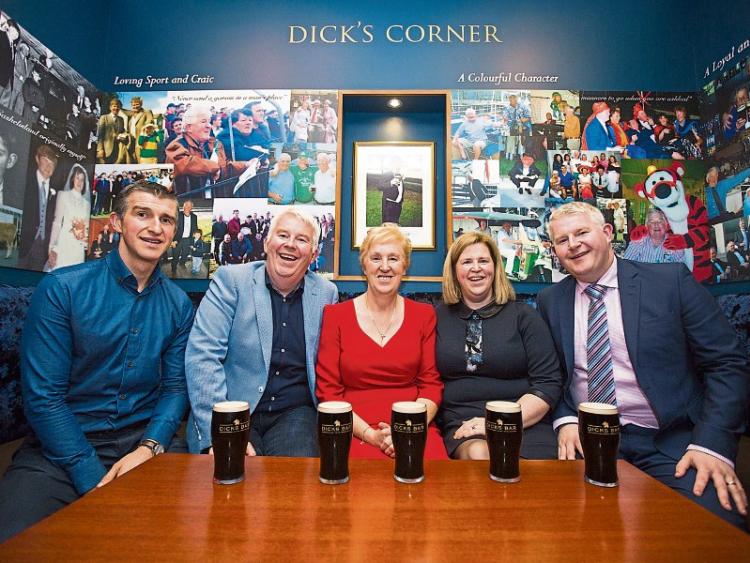 Mary Fitzgerald, centre, with her children Conor, David, Elaina and Richard at the launch of the new bar

ALMOST two years after the death of popular local hotelier Dick Fitzgerald, a new bar and a specially commissioned stout have been unveiled in his honour.

Dick’s bar has been created in the Woodlands House Hotel and Spa in Adare, which Dick established with his wife Mary more than 40 years ago.

With a capacity of 200 people, the new bar forms part of a wider ongoing €2m refurbishment project which saw the 89-bedroom hotel attain four-star status in June 2015.

And taking pride of place at the bar will be Dick’s Stout, a specially commissioned brew created by brewers Jim Lynch and John Coughlan in Kilmallock.

Speaking at the launch, Mary Fitzgerald said that anyone who knew Dick, knew that he was happiest with a pint of stout in his hand holding court amongst his friends.

“When Dick passed to his eternal reward we knew there was only one way to truly celebrate his life,” she said.

“We approached a local small brewery – JJ’s Craft Brewing of Kilmallock – to see if they could craft a stout that would represent the best pint of Dick’s life.  The result is just what Dick would have created himself – a combination of chocolate and fruit tones with a crisp, dry finish. It is a stout that Dick would have been equally happy serving or drinking himself; a stout with plenty of personality.”

“Dick’s passing has not just created an absence in our lives, but also in the hotel and bar. His warm welcome was legendary, as was his stock of sayings, many of which have been incorporated into the character and personality of Dick’s Bar,” Ms Fitzgerald added.

The stout took more than a year to develop, according to Jim Lynch of JJ’s Craft Brewery.

“This is the first custom-brewed stout for us. The development process took more than a year to complete and involved many rounds of tasting and recipe adjustment. The result is a very drinkable dry stout with a hint of rich, sweet chocolate.

“The stout itself is made using Irish malt and barley which we roast ourselves and the brewing process takes two-and-a-half weeks from start to finish. We then barrel it ready for sale exclusively in Dick’s Bar.”

Dick’s Bar is open to residents and non-residents alike.  Dick’s Stout is available on draft priced at €5.50 for a pint and €2.95 for a glass.