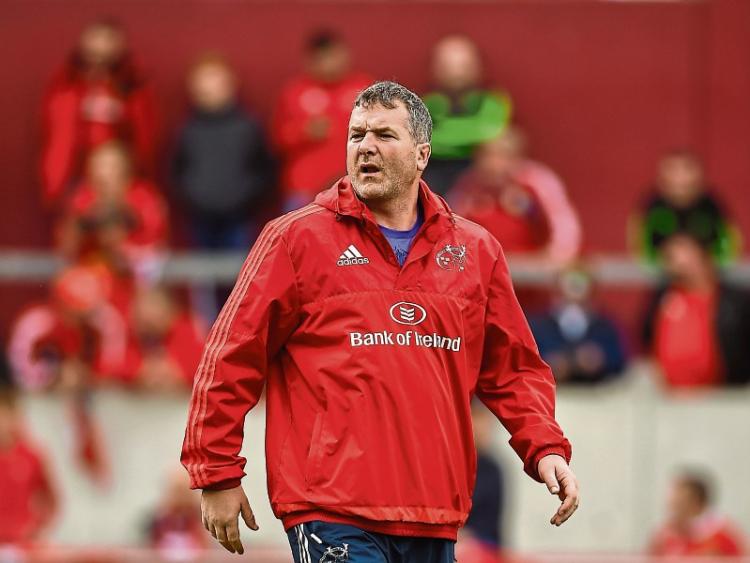 MUNSTER coach Anthony Foley has passed away suddenly in France, it has been confirmed.

The Munster and Irish rugby legend died overnight in Paris, where the team was due to play Racing Metro 92 this Sunday afternoon.

A statement from the IRFU issued at 1.43pm this Sunday confirmed the devastating news.

“It is with deep regret that the Irish Rugby Football Union and Munster Rugby must advise of the passing overnight of Munster Rugby head coach Anthony Foley, at the team hotel in Paris,” said the Union.

“Munster Rugby management are liaising directly with Anthony's family and will provide them with any assistance and support required.

"The IRFU and Munster Rugby pass on our deepest sympathies to all of Anthony's family and friends and ask for privacy for the family at this sad time.

We regret to announce the sudden passing of @Munsterrugby coach Anthony Foley. Our thoughts & prayers are with his family at this time. RIP

“As a mark of respect to Anthony and his family and and to support players, management and staff, Munster Rugby have requested that today's match against Racing 92 be rescheduled.

“Munster Rugby thank Racing 92, EPCR, broadcasters and partners,  and the many fans who travelled to Paris for their understanding and support at this time,” it finishes.

It is with great sadness that we bid farewell to our coach, former captain, colleague and friend today, rest in peace Anthony Foley.

Foley, who lived in Killaloe with his family, was appointed Munster coach in 2014 after a playing career with the province that stretched to 202 caps, with 62 caps for his country.

Speaking on RTE Radio, former Munster and Irish player Donal Lenihan said Foley's passing was "absolutely shocking. There's nothing but shock in the air. At 43 years of age, you don't expect something like this to happen.

"He epitomises what Munster rugby is all about.

"He was steeped in Munster rugby, he was a skilful all rounder but rugby was always going to be his first love. He's had an unbroken involvement with Munster from an early age.

"You think first of his wife and kids. It will take a long time to recover from this."

Fans are gathering this afternoon outside the Stade Yves du Manoir, where Munster were due to play their Champions Cup clash before news of Foley's passing emerged.

The Mayor of Limerick City and County, Cllr Kieran O'Hanlon, has said people are "devastated to hear of the sudden passing of Munster Rugby legend Anthony Foley" and that flags will fly at half mast outside council buildings as a mark of respect.

"It was with great shock that I learned this afternoon of the tragic and sudden death of Munster legend Anthony Foley. He was a giant among men and a true gentleman. He will be sadly missed," he said.

"My thoughts and prayers and those of the people of Limerick are with Anthony’s family at this terrible time.

"On behalf of the people of Limerick I would like to extend our deepest sympathies to this family. All of Limerick is proud of Anthony’s achievements, whether it was lining out with St Munchin’s College, Shannon, Munster or Ireland.

"Anthony was a true son of Limerick, and Limerick is in mourning for one of their own.”

“His career speaks for itself. He was admired by everyone when he put on the red jersey of Munster. Tens of thousands of people cheered when Anthony lifted the Heineken Cup aloft in Cardiff in 2006. It was a long awaited and anticipated victory and Anthony guided the team through it brilliantly.”

“He was always a powerful but steadying influence on the pitch, whether in the red of Munster or green of Ireland, while off the pitch he was a thorough gentlemen.”

“He loved rugby and rugby loved him...May he Rest In Peace”.