Flow of IDA backed jobs to Limerick set to continue 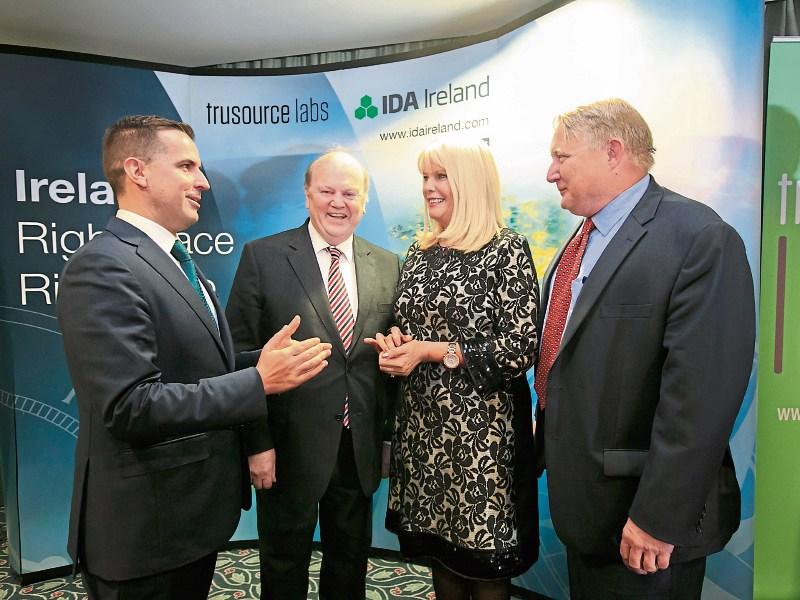 Martin Shanahan of the IDA with ministers Noonan and Mitchell O'Connor, plus Alton Martin of Trusource, at the jobs announcement this week

THE number of IDA-backed jobs created in Limerick over the last month is set to smash through the 800 barrier with the city set to enjoy another magic Monday next week.

This Monday, the job creation agency announced 134 new jobs were being created at technology firm Trusource Labs –bringing the total number of roles announced for Limerick up to 694 since mid-September.

And more jobs are on the way, with Enterprise Minister Mary Mitchell O’Connor telling reporters at a press conference: “I might see you next Monday”.

Trusource Labs, which is headquartered in Austin, Texas, is to open its first European offices at 98 Henry Street, and has already started recruiting for the first of its jobs here, with co-founder Alton Martin saying there will be a “steady ramp” to its total figure during 2017.

The company exists to provide technical support for “complex and risky products”.

It provides backup for companies using Apple devices, with staff working with companies and their engineers when products are at an early development stage.

Mr Martin revealed that Limerick had beaten Dublin to the multi-million euro investment, saying: “To me, it was a no-brainer. I have done a lot of work in Ireland. I love Dublin, I love Cork, but the experience here in Limerick was really refreshing. It is a fantastic place to be, and I don’t think we can be any more pleased.”

He also drew comparisons between Limerick and Austin, Texas.

“One of the things which is really nice in Limerick is the emphasis on education, where you can get people with the talent, expertise and desire. That is the same as in Austin. There is an educated workforce, great people, and lots of help from the local authority. [Limerick] is a great town,” he told reporters.

It joins Dell and Flextronics in Raheen, General Motors at Limerick’s council buildings in Dooradoyle, and WP Engine, which has recently opened in Patrick Street.

Finance Minister Michael Noonan added: “Limerick is a very exciting place to be here and now. There is very high morale around at the moment, and it is great to see. Everything is pointing in a very good direction for the city and region.”