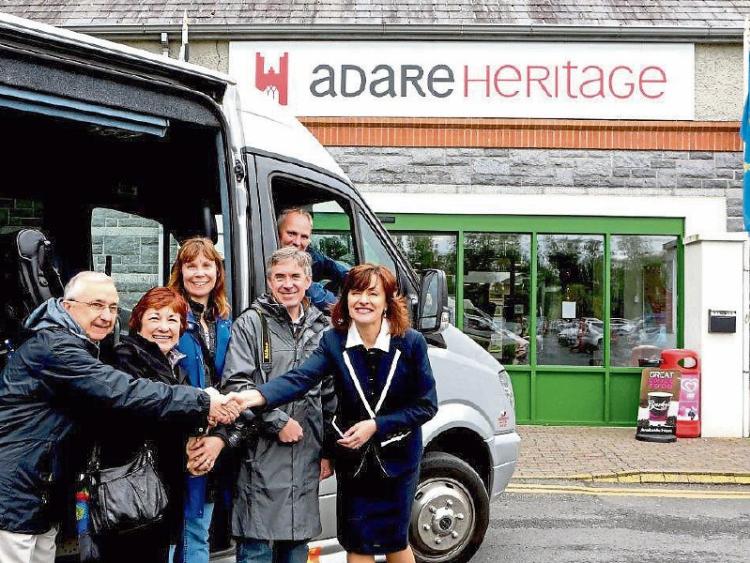 Maeve Martin-Kelly, manager of the Adare Heritage Centre, welcomes visitors to the centre

DETAILS of a €1.4m plan to revitalise Adare Heritage Centre to include a complete redesign of the exhibition area and cafe were outlined to local councillors this week.

The plan also calls for the creation of a plaza area in front of the centre, the expansion of the carpark and the construction of a pedestrian walkway linking it with the village.

Maeve Martin-Kelly, manager of the heritage centre, explained that the overall objective of the plan was to improve the visitor offering, while continuing to celebrate the history of Adare.

“We don’t want to become a shopping centre; we want to keep the ethos of the history of Adare being available to visitors,” she said.

“I think it would make a fantastic, unique experience here,” she added.

The plans include a redesign of the centre to incorporate the museum and the cafe in one area.

This would allow visitors to interact with the exhibits while visiting the cafe. In addition, a glass wall to the rear would open up this space and make it visible to people arriving in the carpark.

The museum is currently housed in a separate part of the building from the cafe and, while entry is free of charge, Ms Martin-Kelly acknowledged that it was not attracting as many visitors as they would wish.

It is also proposed to develop a plaza area in front of the centre, leading visitors towards the town park across the road.

In addition, Ms Martin Kelly stressed the need for an expansion of the existing carpark, pointing out that there was additional green space available beside it.

A pedestrian bridge would then connect the carpark with the village via the courthouse.

The plan also calls for the construction of public toilets to serve the village of Adare.

Ms Martin-Kelly pointed out that the heritage centre toilets effectively served as public toilets for the village and that after 6pm, when the centre closed, there were no toilet facilities for visitors.

She told the meeting that the centre employed 60 full time staff and catered for an average of half a million visitors every year.

The developments outlined this week would represent the first phase of the implementation of the Adare Destination Plan which was announced in 2013 by then Minister for Tourism Leo Varadkar.