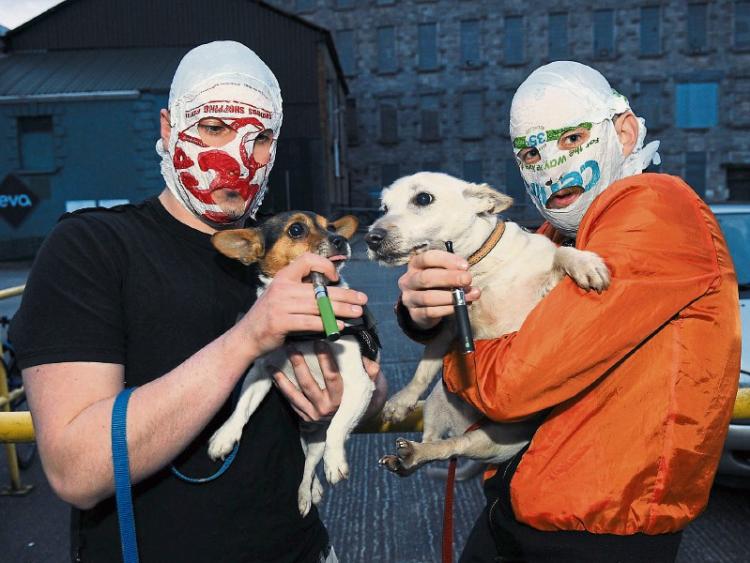 Going Stateside: The Rubberbandits - Blind Boy and Mr Chrome - have a show starting on MTV next week

THE Rubberbandits have landed a show on prime time television on MTV in the United States.

The plastic-bag wearing satirists are bringing their anarchic The Almost Impossible Game Show, already a hit in the UK, Stateside.

The series has been a ratings winner for ITV and the Bandits, who provide hilarious commentary as contestants put themselves through seemingly impossible tasks. It has run for two series in the UK.

The duo tweeted that they were “now laughing at Americans falling over. Coming next week to MTV USA, at 10PM Eastern Standard time ye Gowls”.

Blind Boy Boat Club of the ‘Bandits explained: “We have got a TV series on MTV USA. Proper prime time, 10pm.

“It is our Almost Impossible Game Show so it is just our voices,” Blind Boy told Anton Savage on Today FM.

“This is my favourite thing about getting this show. It means that Snoop Dogg, Tom Hanks, Bill Clinton – any one of them – they might possibly be sitting down at 10pm and they turn on the TV and go, what kind of accent is that?

"I am loving it, it is going through my head thinking about it – Gary Sinise, Kiefer Sutherland could possibly be sitting down and turn on the TV and they go – what accent is that? Is that Norwegian, and then they change channels.

“Dolph Lundgren! You know what I mean? Kofi Annan – the possibilities are endless, that is really what I am getting out of it, I love that.

“I have always had a relationship with that idea with our stuff, whenever we used to have stuff on RTE, I used to fantasise about a Japanese businessman coming over to Dublin to do some business and then he goes to his hotel and turns on the TV at night-time and gets freaked out by what we are doing – they way we get freaked out by Japanese television, and then he is going to go ‘these Irish people are freaks’ and turn off the TV,” he laughed.

Blind Boy explained that he also has a four part documentary coming out on RTE in November.

“When I was filming that in August, what I used to have to do is get up at 7am to shoot the RTE thing, finish at 9pm at night and then I had to go home and work on the American thing, until about 2am,” he said.

“I just do as much as possible for one month. It is the Johnny Cash approach!”

The Bandit said the show was filmed in the States and the duo provided the voice over once MTV sent them the footage.

“It was filmed in the desert in Californian desert, and we didn’t even have to be present – they just sent us the footage and I voiced it over at home. It wasn’t particularly glamorous, but it was grand, good craic.

I don’t know how they will receive it – I don’t care, who cares? We will all die anyway.

“The thing is that this is based on, we have a TV show on ITV and it is the same thing, except with Yanks.

“Basically all it is, it is a mad game show and it used to be us laughing at English people falling over and that game show came around as a joke. Sometimes you pitch ideas to tv companies and they go with the one that you only put in for the laugh.

"That is what happened, we called this thing the Almost Impossible Game Show and it is us laughing at English people – but if you turn it into an acronym, it is called TAIG – which is a disparaging name for Irish Catholics. So we thought it would be really funny if there was a show on British tv called Taig and it is just a pair of Paddys laughing at British people falling over. And then they commissioned it!

"Now it is gone to America and Taig means nothing over there," he laughed.