Olympian to join up to 500 for Urban Run in Limerick 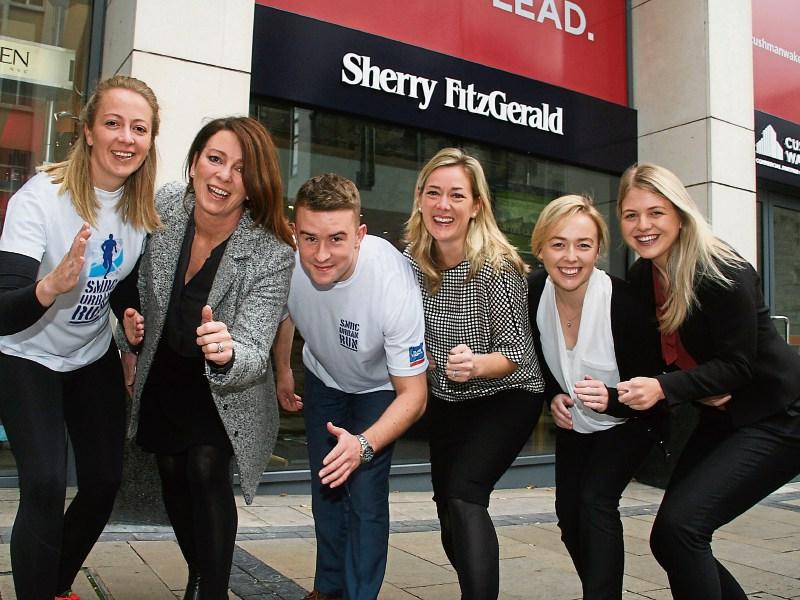 Staff of Sherry Fitzgerald/Cushman and Wakefield, Shannon Street, which sponsors the run, get ready for Sunday

THE St Michael’s Rowing Club Urban Run will take place this Sunday, October 9, at 1pm from the Strand Hotel.

The annual event, which will this year have Limerick Suicide Watch as its primary charity, will coincide with the launch of the National Mental Health Week, which begins on Sunday.

It will be sponsored by Sherry Fitzgerald/Cushman and Wakefield, Shannon Street

SMRC member and Urban Run Public Relations Officer, Paul Lynam told the Leader that he and fellow SMRC members are “delighted to be associated with Limerick Suicide Watch and GROW Ireland” for this year's run.

“With the amount of publicity surrounding mental health at the moment, it’s a good time to be associated with these organisations", said Mr Lynam.

“It (mental health) is becoming much more out in the open,” he added.

The event, open to all to participate in, offers runners a choice between a 5 K or 10 K run or walk.

A choice that Mr Lynam believes offers “a fun day out” to those who wish to take part.  “Most families last year opted for the 5K, whereas the more serious athletes competed in the 10K”, Paul said.

“Our times are recognised nationally and internationally, so it’s a big draw for the more serious athletes,” he added.

With Mr Lynam expecting more than 500 people to take part in Sunday’s run, the event’s PRO said that the reason behind the run’s popularity was mainly down to the fact that “it’s a very flat course” that the people of Limerick are very familiar with.

Irish Olympic athlete Sinead Jennings has confirmed her participation in the event, revealing that she will be running the 5K race with her five-year-old daughter Clodagh.