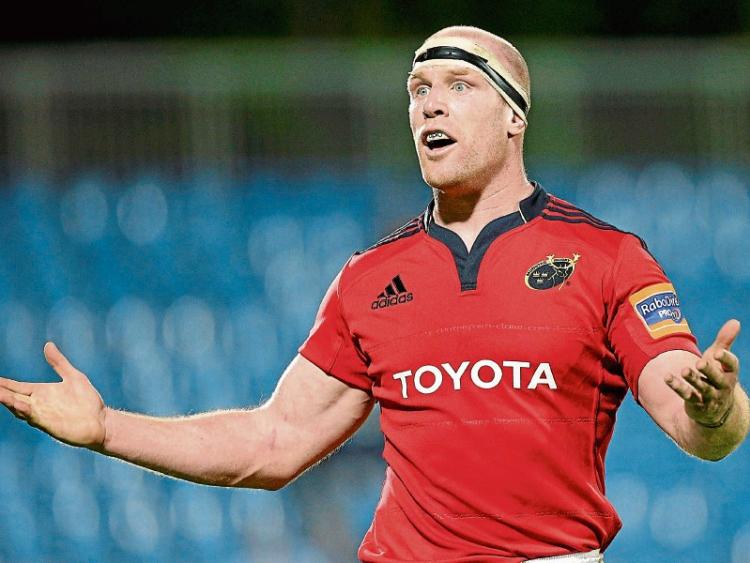 PAUL O’Connell’s rousing ‘fear of God’ speech ahead of Ireland’s first rugby game in Croke Park in 2007 would never have been aired if he had his way, the Munster and Ireland rugby legend has revealed.

The speech recently inspired a TV advert featuring O’Connell which was commissioned by Aldi Ireland to encourage the participation of schoolchildren in the Aldi Play Rugby initiative.

But in his autobiography, The Battle, released this Thursday, O’Connell says that "it bugged me that I was never asked about the use of that clip, because it's not something I would have agreed to.”

He believes that the stirring Braveheartesque dressing-room speech which focused on “manic aggression” and was captured in the RTE documentary, Reaching For Glory, "is just too intimate for people to be sitting down with a cup of tea and a biscuit watching it.”

“It shouldn’t be for that kind of consumption,” he states in The Battle, adding: “I know a lot of people’s impressions of my character came from what they saw of me in the dressing room at Croke Park in 2007, just before we played France in the Six Nations – the clip from the documentary where I was going on about ‘manic aggression’, about putting ‘the fear of God’ into someone’.”

The retired Munster, Ireland and Lions rugby captain states that the speech “was me for half an hour before a rugby match, nearly 10 years ago. It’s very different to how I was - and how we all were - in my later years with Ireland, but it’s probably what some people thought I was like all the time.

“There was a caricature of me: that psycho guy, over-competitive bordering on insane, every hour of the day. And there were stories to back up the impression that some people had – or maybe still have – about my personality: like nobody will play me at Monopoly because I ruin everything by being too desperate to win."

While he agrees that he is “quite driven”, the father-of-two says it  doesn’t apply to everything in his life. “I’m sure that my personality is just the same as a guy working nine to five in a stationery office somewhere, who feels passionate about his job and wants his organisation to be the best,” he says.

Coinciding with the release of his much anticipated autobiography, O’Connell will be signing copies of the book, The Battle, in O’Mahony’s bookshop this Sunday at 2pm.

The 36-year-old is also to make an appearance on the Late Late Show this Friday night to discuss the book which hits bookshelves this Thursday.

Paul has described The Battle, published by Penguin Ireland, as “the full story. I think it’s very honest and I hope people will enjoy it,” he said.

The Battle has been ghost-written by Alan English, former editor of the Limerick Leader and recently appointed editorial director of Iconic Newspapers.

See @LimkLeaderSport for extracts from @Paul_OConnell's book - focusing on @YoungMunsterRFC and in news on his infamous 'fear of God speech' pic.twitter.com/w1pLcQmSzT