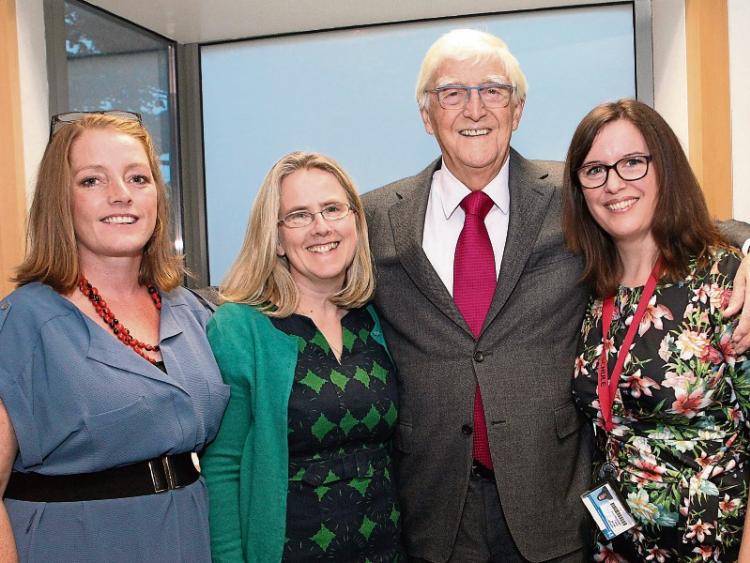 Sir Michael Parkinson with Sharon Kelly, Louise Donlon and Gill Fenton, all of the Lime Tree, prior to the show

LEGENDARY TV chat show host Sir Michael Parkinson’s appearance in the Lime Tree Theatre on Friday night has been described as “one of the highlights of the theatre in recent years”.

Lime Tree Theatre manager Louise Donlon said she was “delighted” to host the legendary Sir Michael in his only appearance outside Dublin.

An Evening with Sir Michael Parkinson celebrated his life and career, after 50 years in the business.

“What came across most for me was the warmth of the reception he received from the audience; the atmosphere in the theatre was lovely”, said Ms Donlon.

The former chat show host was interviewed by his son on stage, and the show also featured footage from some of his most famous interviews.

“He was really charming, very affable. So welcoming and laid-back; he definitely has star quality,” said the theatre manager, who previously said it was a “huge coup” to secure the services of Sir Michael for his only show outside Dublin, explaining that she had invoked Terry Wogan’s name in persuading the veteran broadcaster to do so.

“That is a key part for me, to make the Lime Tree a premier venue so that when people think about coming to Ireland, it is not just to Dublin, but to key venues in cities around the island.”

Such a lovely man RT @LimeTreeTheatre: Hanging out with Sir Michael Parkinson in the green room @LouiseDonlon @MICLimerick

Sir Michael touched down in Shannon Airport on the morning before his performance, where he was added to the airport's 'wall of fame' alongside a number of people he has interviewed, including Mohammed Ali, Gene Kelly and Nelson Mandela.

A photograph of arguably Britain’s greatest ever TV chat show host taken at Shannon will now be mounted on the wall alongside over 60 other famous passengers that have flown in and out of the airport across the decades.

Sir Michael, who arrived at the airport shortly after 10am, was given a tour of the wall in the airport’s transit lounge and, as he explored the exhibition, recalled interviewing some of the world-famous people captured in it.

The permanent exhibition was unveiled last year to celebrate the airport’s 70th anniversary and Mr Parkinson’s photograph will be added over the coming weeks.

Asked about his most favourite interviewee Parkinson said: “Ali without a doubt.”

The charismatic UK TV presenter said that he interviewed Ali on four occasions and 'lost on points' on just about every occasion. Referring to his last interview with Ali he said that that he was struck and saddened by the dramatic change in him, as the boxer was suffering from Parkinson’s disease at the time.

On his favourite Irish interviewees he namechecked the late Val Doonican, whom he described as a very intelligent man.