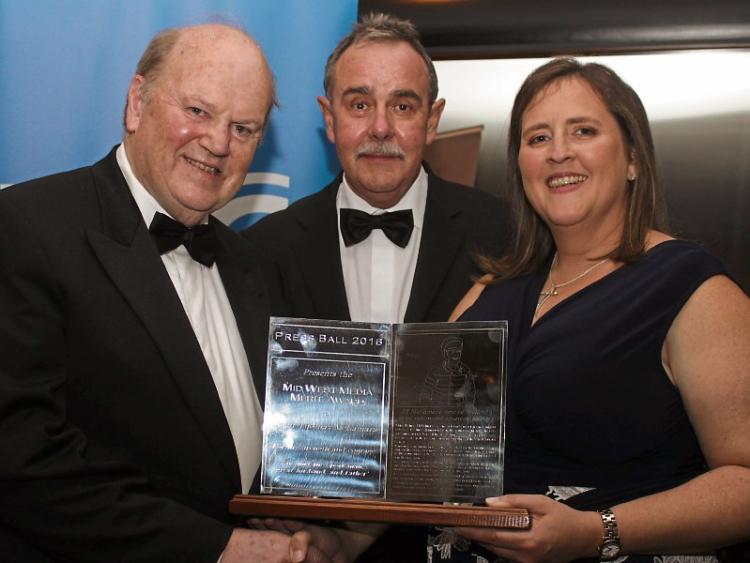 JOCKEY John Thomas McNamara was posthumously honoured at the weekend for the courage and strength he displayed following a horse-riding accident in 2013 which left him paralysed from the neck down.

The amateur jockey, who won more than 600 races during his career, died in July at his home near Croom.

His wife, Caroline, accepted the Mid West Media Merit Award which was presented at the Press Ball at the Strand Hotel on Saturday night,

“John was someone who never sought the limelight and would want his achievements to define his life not the accident that caused him to be paralysed and  dependent on a ventilator to breathe and which cut his life so short,” she said praising the work that is done by charities and voluntary groups across country such as the Injured Jockey’s Fund.

“Fundraising is paramount for so many charities and without the immense fundraising that was done for John when he had his accident he would not have been able to return home and live in his life with us - his family,” she said as she received a standing ovation.

More than 300 people from across the region attended the Press Ball with the proceeds going to a number of local charities including the Children’s’ Ark, the Neonatal Unit and CARI.

Full room here at the @LimerickStrand for the @MWPressBall16 - fantastic to have the support of so many organisations across the Mid-West pic.twitter.com/MqwPv6pGYl

“The success of the Press Ball translates into money - money for deserving charities and voluntary groups throughout the Mid West. The support for the Press Ball is from the region and the money goes back to the region,” said Ron Kirwan, chairman of the organising committee.

Finance Minister Michael Noonan, who was a special guest on the night, spoke of the importance of media in current times.

“Media is very important to us, the media provides us with a public face of the region and we are fortunate to have a very good media in Limerick - all organs of the media, representatives of national media and very strong local media as well and it’s absolutely essential to have a stong media for the sake of the social and economic life of the city and of the wider region,” he said as he quipped: “You shouldn’t believe everything you read in the papers.”

Broadcaster Len Dinneen and Journalist Tony Mulvey of the Clare Champion received special awards on the night to “mark and celebrate their contributions to the industry” during their respective careers.

For more photos from the Press Ball, see this week's Limerick Leader, broadsheet editions - out Thursday