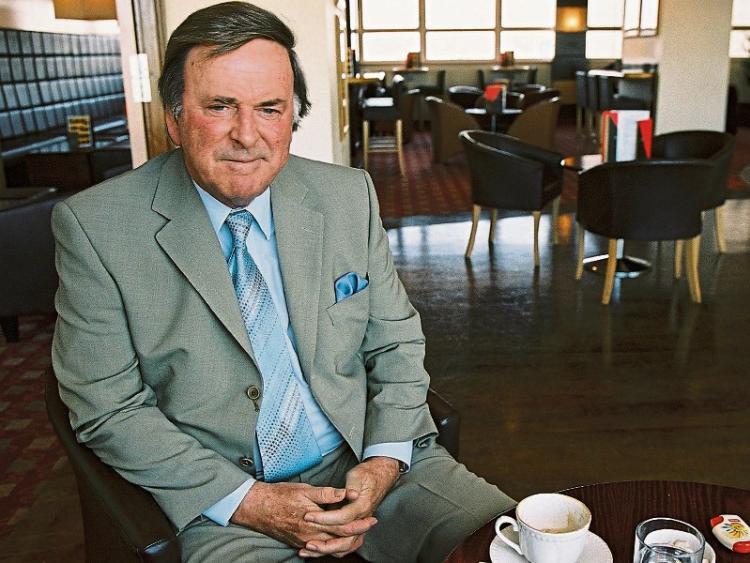 The late broadcaster, Terry Wogan, in his native Limerick several years ago

PLANS are in place for a memorial to be erected in the city in memory of Freeman of Limerick, the late Terry Wogan.

The newly revamped Limerick bus and rail station is being mooted as an location for a statue of the legendary broadcaster, with Mayor Kieran O’Hanlon set to bring plans to council.

In a week where over 2,000 friends and relatives of the legendary broadcaster gathered at Westminster Abbey in London to pay their last respects to the star – who was born in the Ennis Road – Mayor O’Hanlon believes it could benefit Limerick from a tourism perspective.

“Even alone the unveiling of a statue to Terry Wogan would attract hundreds if not thousands of visitors annually to Limerick," he said.

"For his army of followers, it would be a pilgrimage they would have to make. We honoured him in life, we should likewise do it in his passing,” added the Mayor, who represented Limerick at the memorial service.

Councillor Joe Leddin, who was mayor when Mr Wogan received the Freedom, endorsed the idea, and said Colbert station needs “some monument or feature which would complete the physical transformation of that area”.

The Limerick flag flew high in London this week as friends and colleagues paid tribute to broadcaster.

The Mayor of Limerick plus several members of the Limerick Association in London were among over 2,000 people gathered at Westminister Abbey in the British capital for a memorial service.

The 77-year-old, who was a Freeman of the City and born at the Ennis Road, died in January following a battle with cancer.

Mr Wogan began his broadcasting career with RTE, before moving to Britain where he began working for the BBC. He became synonymous with the broadcaster’s coverage of the Eurovision Song Contest, and hosted the top rated breakfast show Wake up to Wogan.

“Terry Wogan loved Limerick, and that came across from a lot of people I met. The ceremony was magnificent,” said Mayor O’Hanlon “Limerick got a wonderful mention in the whole programme.”

Mayor O'Hanlon reported how the service - broadcast on BBC Radio Two on what would have been the 50th anniversary of Wogan's first show - contained some recordings, and some of the more comedic elements of his career.

"The BBC orchestra played some hymns, while there were prayers, and a number of his former colleagues who got up and spoke about their time with him," Cllr O'Hanlon reported.

Among these former colleagues were presenter Chris Evans, actress Joanna Lumley, while music came from Peter Gabriel and Katie Melua, a singer whom Wogan championed on his show.

She sang an acoustic version of her eponymous hit 'The closest thing to crazy'.

Mayor O'Hanlon took the time to speak to Mr Wogan's wife Helen and son Alan, where he broached the idea of unveiling a monument in honour of Limerick's most famous son, a man remembered by Ms Lumley in a poem as 'The former greatest living Irishman'.

John Giltenan, chairman of the Limerick Association said: “We were all very touched by the whole service. It was so very moving. It was truly memorable, and it really gave a fitting tribute. It gave a great overview of his life, and his tremendous involvement in the contribution he made to broadcasting and the actual regard he was held in Britain and Ireland."

Mayor O'Hanlon, who was joined by council executive Seamus O'Connor in London, paid a warm tribute to the association, which represents Treaty men and women in the British capital.

"It is great to see a group of people so proud of Limerick and willing to say good things about it. People like these are so important," he said.