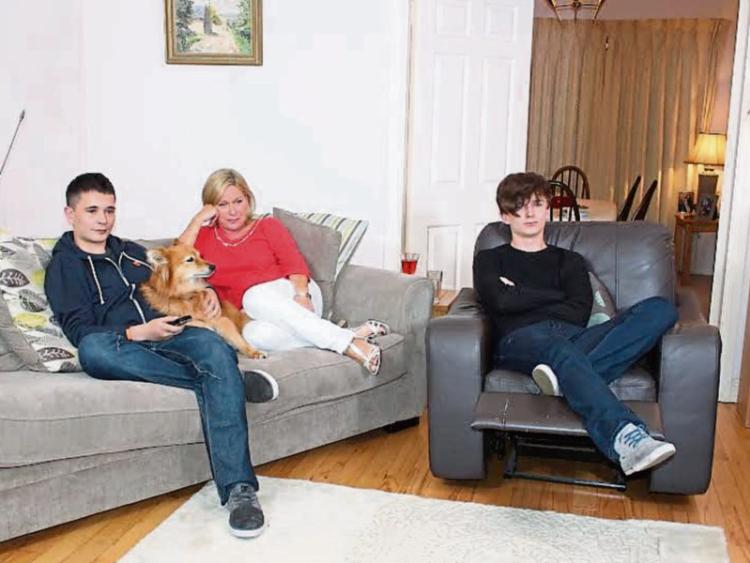 The Monaleen family Aoife Ryan, and her sons James and Alex, star in Googlebox Ireland

AT HOME on the couch. Feet curled up. Cups of tea planted on laps. Or glasses of wine. And ranting at the TV.

Who’d have thought people would like to watch a programme about other people watching programmes? It’s a disarmingly simple format that has many viewers hooked.

But is is now a huge success, after its inaugural Irish viewing last week, having run in the UK for the past three years.

This Thursday night’s second episode, narrated by comedian Deirdre O’Kane, is again expected to be another major draw with viewers.

A Limerick family are among the stars of the Gogglebox Ireland series, which first aired last Thursday night, after casting began last June when the producers sought “genuine characters who don’t even realise they’re characters”.

“You have got to cast people with a huge understanding of what makes your country tick, and people who viewers at home will think: ‘I recognise them,” explained producer Tania Alexander.

And there certainly are a few characters in the Irish show, with twin brothers from Cavan being hailed as the new O’Donovan brothers with their natural wit, as well as a few withering put-downs.

The show also features Monaleen family, single mum Aoife Ryan, with sons James and Alex, both of whom are studying computer science in Limerick Institute of Technology, amongst other groups of friends and family in the show.

Professor Eoin Devereux, co-founder/director of the Popular Music and Popular Culture Research Cluster at the University of Limerick, said that part of its appeal is that “the experience of watching television in families or in other social groups is often as much about what is said in the room as is being said on screen.

“Googlebox works because we can identify with it so easily. That said, the various couples, families and individuals are really well-chosen. It's early days for the Irish version, but it clearly has the potential to do the very same thing. The mix of social class groups is an essential ingredient and makes Googlebox all the more interesting. In the British series we hear about important social and political issues like immigration and Brexit from a wide range of perspectives.”

“Depending on your politics, these can be either frustrating or entertaining.”

The award-winning British reality show has been a mainstay on Channel 4 since March 2013.  Last week’s first Irish episode was an instant hit with viewers with a total of 392,000 all tuning in to watch households from all over Ireland watch telly.

It was particularly popular with the 15-44 age group, commanding a 19% viewing share. TV3 introduced viewers to a total of ten households, including new Twitter sensations The Tully twins, Neal and Fergal from Cavan; Cabra pals Jamie, Lindsay, Ashley and Grainne, Castleknock ladies Angela and Eileen and Liberties duo Tracie and Anita.

#GoggleboxIRL was the top trend on Twitter that night with several comedy gold moments. It airs every Thursday at 9.30pm on TV3.