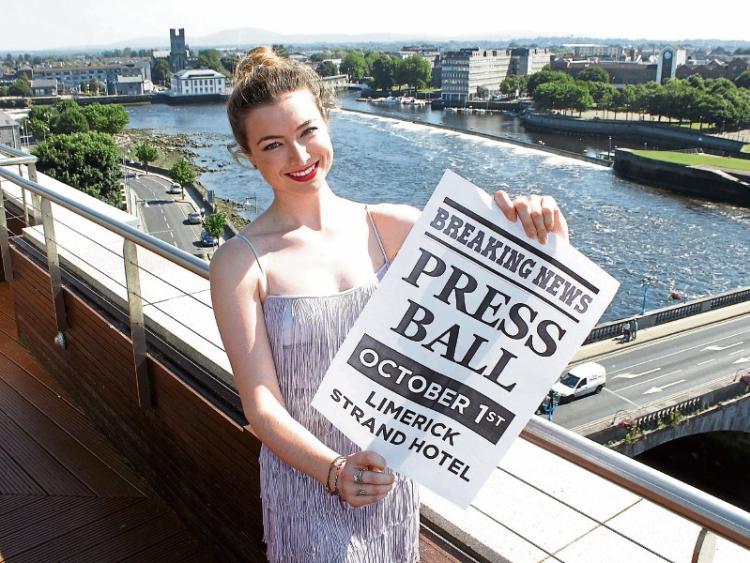 Read all about it: Meghann Scully of Spin South West launches the 2016 Mid-West Press Ball, which takes place in the Strand Hotel this Saturday

FINANCE minister Michael Noonan will be the special guest at the Mid-West Press Ball which takes place in the Strand Hotel this Saturday night.

Mr Noonan, a former winner of the Mid-West Media Merit award at the 2012 Press Ball, will present the prize at the event, with the winner to be announced on the night. The award is given to newsmakers and those that have made positive contribution in their particular field.

Honorees at the ball, a fundraiser that raises thousands of euro for charities and local voluntary groups, will include broadcaster Len Dineen of Live 95FM and journalist Tony Mulvey of the Clare Champion newspaper, to “mark and celebrate their contributions to the industry over the years”, according to Press Ball chairman Ron Kirwan.

The Press Ball is expected to raise up to €15,000 for services to help children in the region. The majority of funds raised will be dedicated to three groups – the Children’s’ Ark, the Neonatal Unit in Dooradoyle and to CARI (Children at Risk in Ireland), all of whom have a brief to work with the children, Mr Kirwan said.

“As we are a body of people working in all areas of the media industry throughout the Mid-West, we feel that the money we raise should primarily benefit the communities that we work and live in.

“These three beneficiaries are three perfect examples of this and the work they do is extremely necessary and highly valued,” he added, noting that the committee hope to be able to support other charities and voluntary groups with smaller sums.

A capacity crowd is attending the ball, a hugely popular and long-running black tie event was started in Limerick in 1951. After fading out in the 1970s, it was revived in 1999 and has since raised €100,000 for local charities and voluntary organisations.