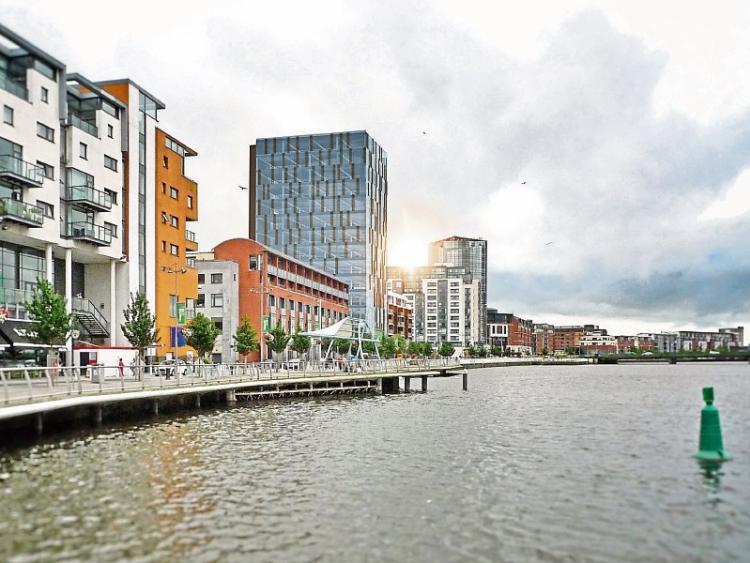 An architect’s impression on how the proposed €40m development, centre, will look

A FORMAL objection to the new €40 million riverside project in Limerick city has "cast doubts" on whether it can start in the New Year as planned.

As revealed exclusively by the Limerick Leader last month, plans have been lodged with Limerick City and County Council for a 15-storey skyscraper fronting onto Bishop’s Quay.

The scheme could bring 100 construction jobs initially, as well as multiple more permanent roles once completed.

It will see 150,000 square feet of office space, 42 luxury apartments and commercial space, including new cafes and restaurants.

Rudi Butler, the chairman of Kirkland Investments, which is fronting the massive project, has said previously that he hoped to have builders on site by January .

But he said a comprehensive objection, by a resident of he neighbouring Riverfront complex, now puts this timeline in doubt.

Speaking to the Limerick Leader, he said: “We are disappointed that  someone has found reason to object. We had hoped to start on January 3 next or before, but now this has cast doubts on when we can start."

Mr Butler added that they would take on board any objections and concerns raised and look at them in the hope that they could be dealt with through planning process.

The resident, who lives in Riverfront – said if the scheme gets the go-ahead, it would have a “profound invasion of the existing privacy my home enjoys”.

In the letter, he added: “It is with this point that I remind you that under basic human rights a person has the right to peaceful enjoyment of all their possessions, which includes the home and other land.”

The objector added the plans will result in a “hugely negative impact on the value of my property and standard of living.”

“The structure shall be overlooking my dwelling looking directly into my kitchen, living room and bedroom, also onto my private balcony, resulting in loss of privacy and a loss of my ability to use the full amenity of my private balcony and living spaces,” he said.

And the objector also suggested the huge proposal – which will see the former ESB offices and old Bord na gCon headquarters demolished to make way for it – actually runs contrary to the City Development Plan.

They point out that according to this strategy, several considerations must be met for high buildings.

“The proposal should be very carefully related to, and not have any serious disadvantages to its immediate surroundings, both existing and proposed, and especially to any other high buildings and prominent features in the vicinity and to open space,” they say.

Planners should also, they say, take account of environmental impact assessment, “meaning an assessment must be carried out by the planning authority and should describe and assess the effect of a development on human beings and material assets.”

Limerick City and County Council has yet to set a date on when it will decide on the €40m plans. But groups and individuals can make submissions until next Thursday, October 6.