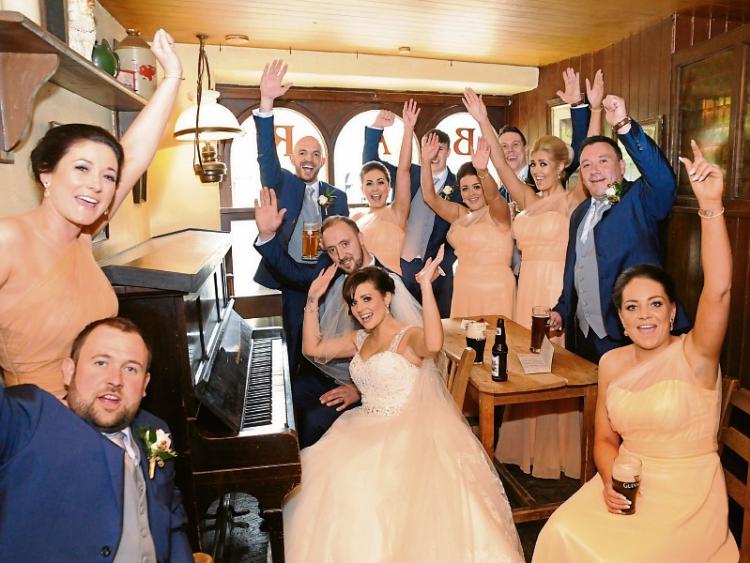 FOR Melissa Hughes and Ross Kelly love blossomed over the snooker table in Stix on Nicholas Street in the city more than 16 years ago.

The local hang-out for teenagers back in the day led to their happy union last month, after a 10-year engagement.

Melissa, 30, a self employed hairdresser and husband Ross, 32, the head chef at Azur Restaurant in George's Quay, are both originally from St Mary's Park but now live in Corbally.

They have been “best friends” since then, and spoke early on about getting married.

First, they wanted to get their house and had a little girl, Robyn, now nearly seven, who was there on the day to watch the blessing of her parents. A model of her also adorned the wedding cake.

Getting married, they said, was putting the final piece of the jigsaw in place.

Ross proposed in the summer of 2006 when they were on holiday in Sunny Beach, Bulgaria.

He had planned to propose on the beach, with a ring he bought in Keane’s jewellers, but on the day his nerves got the better of him, and he proposed that morning in bed. Melissa then picked out another beautiful solitaire white gold ring in Bulgaria.

After a decade-long engagement, they got married on May 23 last in The Bunratty Castle Hotel, which they would thoroughly recommend.

Their favourite part of the day was seeing how beautiful St Mary's church was on the day and "seeing so many of our family and close friends and clients being there to celebrate our special day.

“We got really lucky with the weather as we had the sunshine which was a massive bonus.”

Their best advice to couples getting married is to enjoy the build up to the big day and not to get stressed out unnecessarily.

“On the day, enjoy every single second because it passes so fast.”

They were married by a close family friend, Fr Tom Mangan, and singer John Guerin, who is part of their family, and who sang at the church.

Did it live up to their expectations?

“Absolutely. It was everything we ever wished for. We both had an amazing build up and the day was so special. Truly a day we'll both never forget.”

Venue: The Bunratty Castle Hotel. They were amazing in every way, from start to finish. David Shelly, the general manager, and Heather Lee, their wedding co-ordinator, were just fantastic in all aspects of the wedding. We couldn't have asked for anymore.
Dress: The Little White Dress shop, Thomas Street
Photographer: Paul Mullins
Hair: The Hair Boutique, Meelick
Make-up: Mandy O'Loughlin Frawley
Groom's and groomsmen suits: Esquire suit hire, Limerick
Groomsmen: Jason Benn, Riann O’Dwyer, Jonathan Hughes and Donagh Noonan
Bridesmaid dresses: DIY Dresses
Bridesmaids: Mary Hackett, Denise O’Dwyer, Amy Hughes, Theresa Keane and Samantha Ryan
First dance song: This I Promise You by N Sync
Band: Escapade
Wedding cake: Zest, Shannon
Number of guests: 230
Budget: With over 230 people at the reception, our budget was large. But once we had our minds set of 'Let's have everything we want, as we plan to only do this once’, budgets were blown off the roof-tops. But who cares; it's your wedding day, go for it
Honeymoon: New York