Nashville nuns settle in to new posting in Limerick 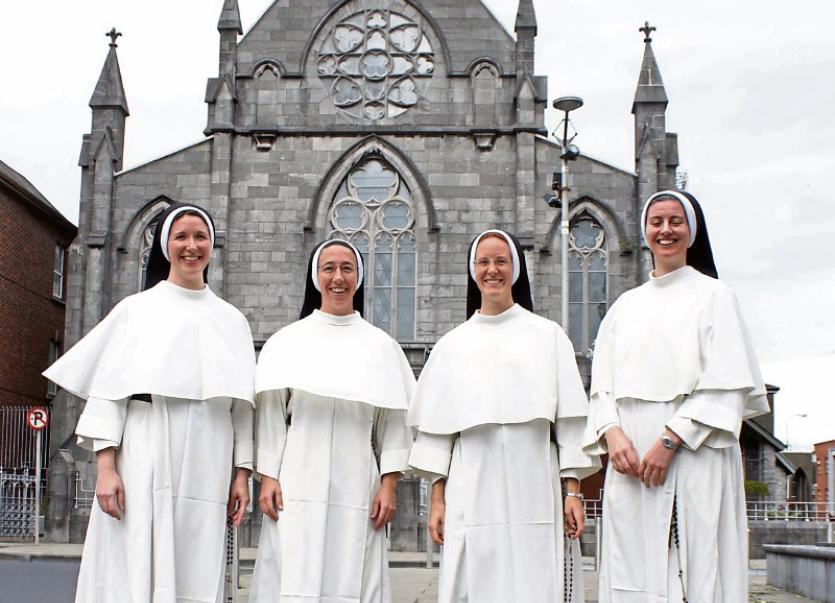 BEHIND a typical blue door on Glentworth Street, four young women are living out their faith in a most radical way.

Limerick’s new Dominican nuns, who are all aged in their early to mid-thirties, arrived in the city last month from Nashville, Tennessee, to keep St Saviour’s Church — and the 800-year-old Dominican presence in Limerick — alive.

The Dominican Friars reorganised their commitments in Ireland because of the falling numbers, and they announced that they would be withdrawing from Limerick earlier this year.

But Sr Mara Grace Gore, Sr Beatrice Clarke, Sr Caitriona Kavanagh and Sr Rose Miriam Collins have stepped in, taking over the work of the Dominican Friars before them.

Although they’ve arrived from Nashville, the Sisters come from all over: Sr Mara Grace is from Kentucky, Sr Beatrice from Seattle, and Sr Rose Miriam from sunny San Diego.

Sr Caitriona is originally from Wexford, but travelled to Tennessee after discovering the Nashville Dominicans on the internet six years ago.

They see the decision to join a convent as nourishment for an appetite to serve, an appetite that couldn’t be satisfied by any amount of lay charity work, college education or successful careers. For the Sisters, these things just weren’t enough, and they talk of knowing that they still “had something left inside” to give.

“I wanted to get married, I wanted to have a family… I saw the Sisters and I thought ‘whoa, that’s so awesome that that happens in our church, they’re so radical in what they do’, but I still thought it’s not for me. But it just kept coming back,” said Sr Beatrice.

None of the Sisters described wanting to become a nun as children, although Sr Mara Grace began to play with the idea at 16 after a retreat and entered the convent at 20. The other Sisters joined religious life at various stages in their 20s and at 30.

Kitted out in the Dominican white habit, the Sisters are hard to miss on their promenades around their new home city. One encounter that stuck out in recent memory involved a man who was unable to hold in his surprise at seeing them.

“We were walking by the river and a man walked past and he turned back and just said ‘who or what are you?’ It was very funny, it was a comical greeting but we had a nice chat. He had an aunt in the religious community. People here feel a sense of heritage and a sense of family, whether or not they’re practising Catholics, it’s something that’s deep in the culture.”

Sr Mara Grace said that they’ve been overwhelmed with the positive response they’ve gotten in Limerick so far.

“A lot of people talk about being taught by sisters when they were younger, they reminisce on their schooling days with fond memories of the sisters who taught them. So it’s neat to be walking in those sister’s footsteps and carry on the heritage of religious life here in Limerick.”

Sr Mara Grace remarked that the strong faith of the people of Limerick has inspired her, saying that such devotion is not as common in the USA.

“To see how many people actually stop into the church during the day — that does not happen in the States, at least where I grew up it wasn’t common. Just to see the number of people who are paying a little visit to the Lord and lighting a candle, it’s been really inspiring. So I suppose that’s been a culture shock in a good way.”

They’ve swapped out a Netflix subscription with a book of scripture, but for them the benefits of their lifestyle outweigh the sacrifices.

“Things like turning on music or turning on a movie when I wanted to, when you enter a convent life those aren’t things you do anymore. I was surprised to find that I didn’t think of that as a loss. I knew it was a sacrifice, but that’s different,” Sr Beatrice said.

“It’s not a sense of ‘I can’t do this anymore, I can’t do that anymore’, because you’ve been looking your whole life for something that you feel you have this one shot at, and if you don’t take it when it’s being offered you’re going to lose the opportunity. So compared to that, having the freedom to put on Netflix is put into perspective.”

The pale-cloaked Sisters exude an extraordinary peacefulness and contentment, even though most of us would see their lifestyle as a huge sacrifice. The regular eruptions of laughter that pepper our conversation give the impression that they have fun living together.

Sr Caitriona said that they don’t miss frivolous pastimes, because they’ve replaced them with “togetherness”. Their time is mostly spent with each other, and before coming to Limerick, with the 160 other Sisters in the Motherhouse in Nashville.

“Community is a really big part of our lives, so we weren’t losing any of that, even gaining the time that we spent together in developing relationships and being together, whether it’s in music, or sport...”

The way that they speak about the happiness they have found in their community sounds similar to the experience of being in a happy relationship. The Sisters obviously agree, with Sr Mara Grace referring to herself as a “bride” of God. The human element of religious community life allows them to strengthen each other in what would otherwise be a silent life of prayer.

“You learn to really appreciate the gifts of the other, and to not be threatened. I think it’s a really common human experience to be threatened by someone else’s gifts, and it’s a competitive kind of thing we fall into. In community, you really learn to just rejoice in their gifts, and it’s amazing about how we’re all lifted up and encouraged by each other.” Sr Rose Miriam said.

Despite ruling out some pastimes, the Sisters are active, and can often be seen walking around the city, tossing a frisbee or kicking a football — all in full habit, naturally. They explained that after vows, the religious habit is the only thing they wear, besides the aprons they sometimes slip on top to protect the delicate white fabric. A Sister joyfully jokes that “13th Century style is classic” when asked if any of them have a secret passion for fashion.

They allow themselves to wear suitable footwear when “running around” however, particularly important for the hikes they sometimes go on together.

As a congregation in Nashville, they use Facebook, but they don’t have individual social media profiles. They are playing around with the idea of setting up a Facebook page for their new small community in Limerick. They assure me that they’re settling well in Limerick, and they are contributing to Diocesan work like the Dominican priests that went before them. Daily 1pm mass in St Saviour’s still goes ahead, with neighbouring priests sharing the role.

Wexford native Sr Caitriona was as astonished as her American Sisters at the welcome Limerick has given them.

“Even though I’ve come home… people talk about how warm and welcoming the Irish are and I don’t think I had forgotten that.

“But I think particularly in Limerick, especially from the religious community here, and the huge number of religious Sisters that are here in the Diocese of Limerick, the immediate sense of family, it’s really really touching.”