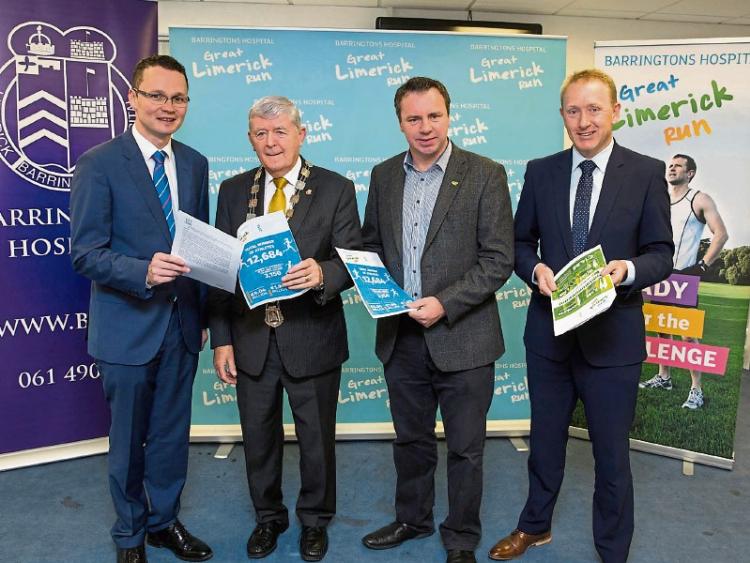 THE Barringtons Hospital Great Limerick Run generated an economic impact of just over €4m this year, a new study has found.

This year saw 12,684 people take part in a series of runs over the May Bank Holiday weekend, including 3,150 children who participated in the UL sport children's fun run.

It found that 47% of athletes stayed two nights in Limerick, and of those who were not from Limerick and travelled here for the race, six out of 10 people said they would stay in Limerick again.

Speaking at the launch of the report in City Hall this Monday morning, race director John Cleary said that the success of the race as it now enters its eighth year is testament to the effort everyone has put in in "showcasing Limerick", from the volunteers, the sponsors, the media and gardai.

"Our plan is to grow the contribution to charity significantly in the years ahead, and growing the size of the race with further economic and social benefits," said Mr Cleary.

The metropolitan Mayor of Limerick, Cllr Michael Hourigan, said that the run is "a success story for Limerick, which continues to grow from strength to strength" and praised the "positivity it creates in the city, with an atmosphere of joy and excitement."

W2 Consulting were engaged by Limerick City and County Council to undertake an independent socio economic evaluation of this year's run. The independent review is a follow up on the previous economic impact review conducted in 2012.