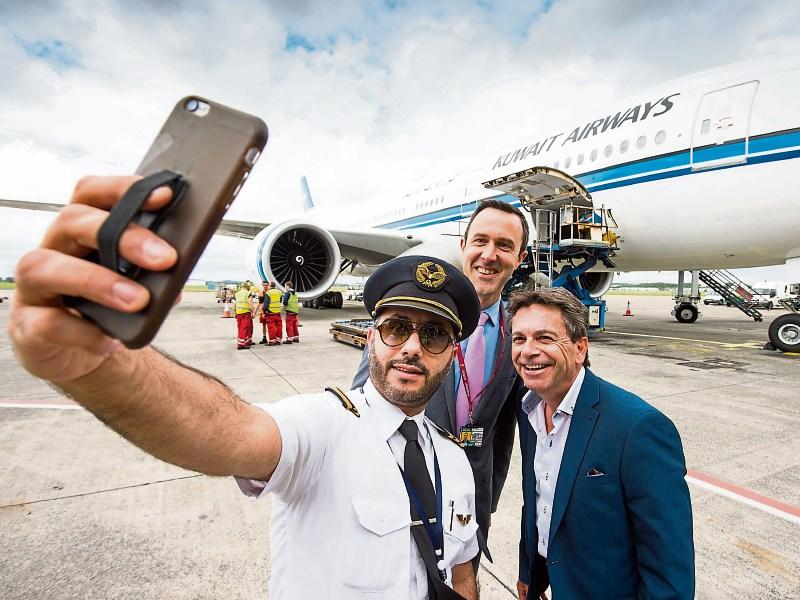 Abdullah Alali with Andrew Murphy and Declan Power for the arrival of the first Kuwait Airways plane to Shannon in June Picture: Diarmuid Greene

SHANNON Airport has confirmed that Kuwait Airways is to extend its transit service and double frequencies from October.

The airline is to extend its Kuwait to New York JFK transit service through Shannon into 2017, with frequencies to double to six weekly from October 31.

The service began operating three times weekly from the end of June for a planned four month period but the airline has now committed to extending the service until February 15.

The Shannon transit service is the first time the carrier’s flag has appeared for scheduled services on an Irish runway.

“This is very good news for Shannon, not alone in that it is additional business for the airport but it illustrates again Shannon’s suitability as a transit stop for long-haul services between the likes of the Middle East and the US but also other east-west routes,” said Andrew Murphy, chief commercial officer with the Shannon Group.

“Kuwait Airways originally looked at this as a temporary service and we are very encouraged by the fact that they have decided not alone to extend it to February but double frequencies to daily services, except for Sundays.

“Shannon has an excellent reputation for efficient and quick handling of all transit aircraft, from the smallest to the largest.  We see opportunities to grow this side of the business and Kuwait Airways decision to extend and increase frequencies on their service further validates this.”