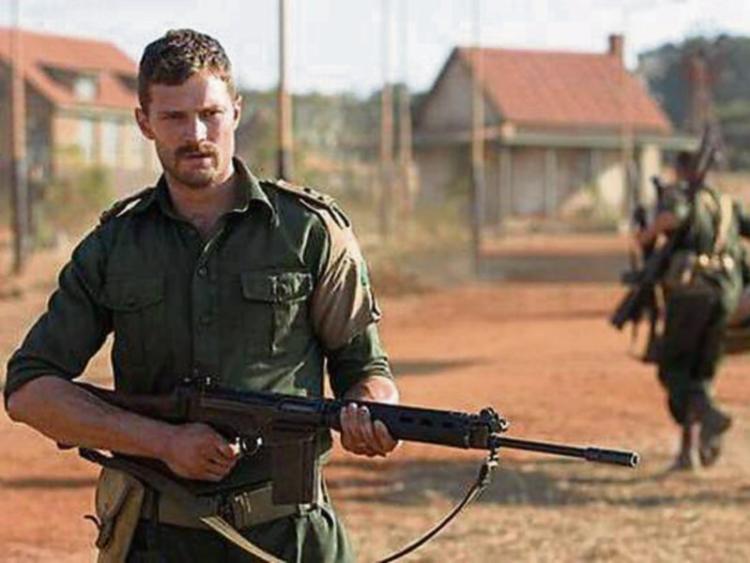 Jamie Dornan who stars as Comdt Pat Quinlan in the newly released Siege of Jadotville. Below, Tadhg Quinn with his daughter Helena

THE film The Siege of Jadotville, which hit Irish screens this week, has been given the ultimate thumbs up by a man who fought and lived through it: Tadhg Quinn from Purt, Abbeyfeale.

“It was brilliant,” Tadhg told the Limerick Leader after the premiere in Dublin attended by the film’s star, Jamie Dornan. He had been anxious about it beforehand, he admitted, worried that it would stray too far from the truth. But, he said with satisfaction: “It was straight to the bone.”

The film tells the story of how, in September 1961, a 157-strong Irish company,  the  A Company, 35th Battalion on a UN mission to keep the peace in newly independent Congo, found itself  surrounded and under attack by 3,000 Katangan rebels.

Tadhg Quinn was a corporal in that company, having joined the Irish Army the year before. “Jobs were non-existent. It was either that or England,” he told the Limerick Leader.

But he also had a fascination with guns and was trained in small arms, in submachine guns and in mortars.

He can still recall the heat and the misery on the ground when he found himself in the Congo. “It was sub-Saharan conditions. We were based in Elizabethville but were sent down to Jadotville because somebody somewhere decided that the Belgians in Jadotville needed protection.”

There were a few skirmishes, he recalled, but led by Comdt Pat  Quinlan, the company dug in and prepared in the six or seven days before the siege began.

“I was coming off guard duty when the fighting started about 6.45am,” Tadhg recalled. “I knew, we all knew, straightaway we were in deep. We weren’t going to get out of it so easily.”

But he described his commanding officer Comdt Pat Quinlan.  “absolutely brilliant.” “He was responsible for bringing us all home safe.”

Quinlan’s understanding of their situation, and the tactics and strategy he employed were superb in Tadhg’s opinion.

“We had trenches. We were prepared,” he added.

The intense fighting lasted for four solid days and into the fifth. “We knew we were up against it. The only difference was that when you were firing shots in Ireland, nobody fired back at you.”

But by early on the fifth day, the Irish battalion was in trouble. “We were out of ammunition, food and water. Water was a massive problem. Our commandant had arranged a ceasefire but they didn’t abide by it. They knew we had no water food or ammunition.”

There were two attempts made to get re-inforcements through but the rail bridge was blown up and the road bridge was mined.

”They couldn’t get across the river. We were cut off completely,” recalled Tadhg.

Their opponents were in and around the Irish position, waiting for men to start dying. There was no option but to hand in their arms.

“Comdt. Quinlan made that decision in order to preserve the lives of his men,” Tadhg said.

And their opponents could not believe that the Irish side had suffered no fatalities. What followed were five weeks in captivity before an exchange of prisoners was organised. A few of the men were roughed up a bit, Tadhg said but they were well treated for the most part.

Even then, their Congo mission was not over. Following their release, the men were re-armed and deployed elsewhere in the Congo. Tadhg himself  was due to head home at the end of October but further fighting erupted and it was late afternoon on Christmas Eve before he finally hit home to Abbeyfeale.

What followed, however, was worse than any fighting. “We were ignored. That was bad enough. But the name-calling was worse,” said Tadlg. lThe men were taunted for having given up their arms.

“There was more blood spilled than during the fighting. If you were called a coward there was only one way to sort that out.”

Their treatment was “absolutely brutal”, he said. “It came from the very top down. But it was nothing to what Comdt Quinlan put up with. He was totally ignored.”

They were not properly equipped  going into the fight, Tadhg reckoned. And they were short on rations.

Tadhg spent another four and a half years in the army and even served on another UN mission to Cyprus.

But for a great many years after, he never talked about his experience at Jadotville to his family.

The sense of having been wronged, however, lived on among the men of A Company but it took over 40 years and a campaign by some of the men before their service and bravery was officially recognised and a plinth erected with their names, number and rank. And like other veterans, Tadhg credits former Minister for Defence, Willie O’Dea for making it happen.

“We thought that was the end of that. I was happy with that,” Tadhg said.

But then the idea of making a film emerged and became real.

Tadhg believes that it was the film that prodded the Department of Defence into marking the 55th anniversary at a ceremony last Saturday at Custume Barracks, Athlone where a Presidential Unit Citation was presented.

He described the wording on the scroll as pitiful, with no number, rank or name.“It was a bloody insult,” Tadhg said with feeling. His family, however, who attended the ceremony with him, was proud that his service was, finally, recognised. 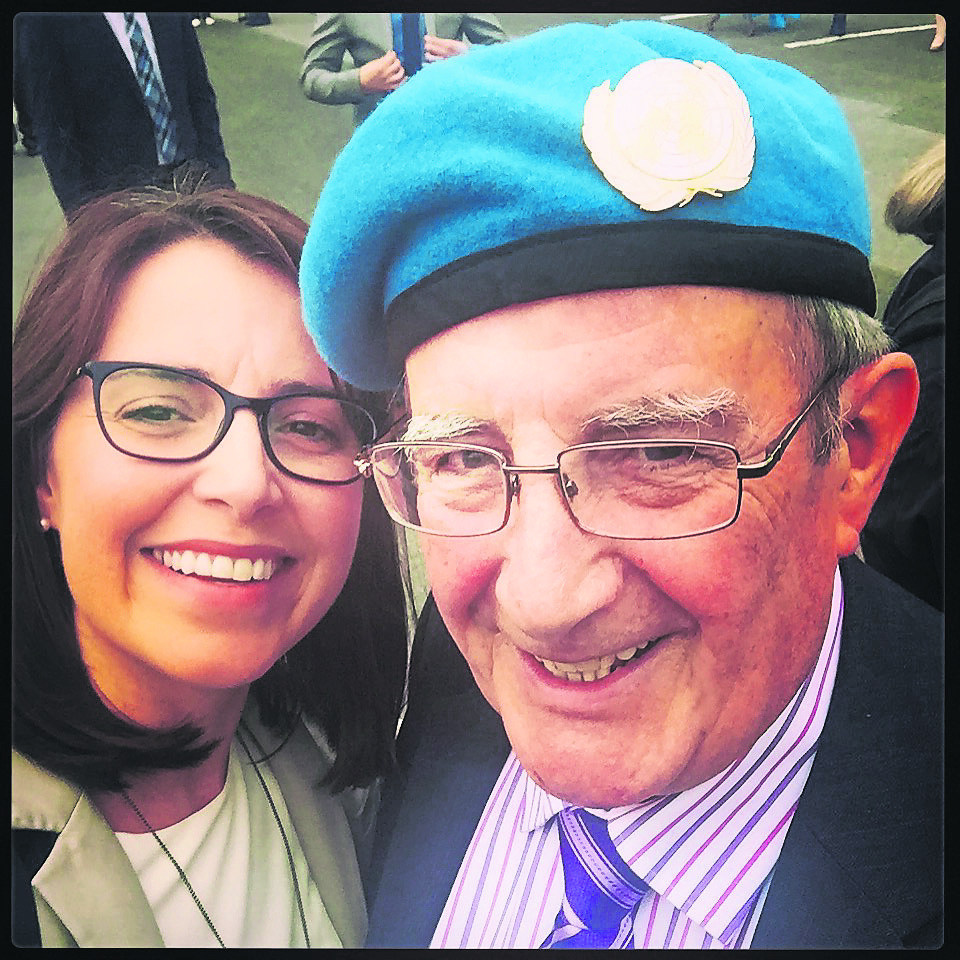