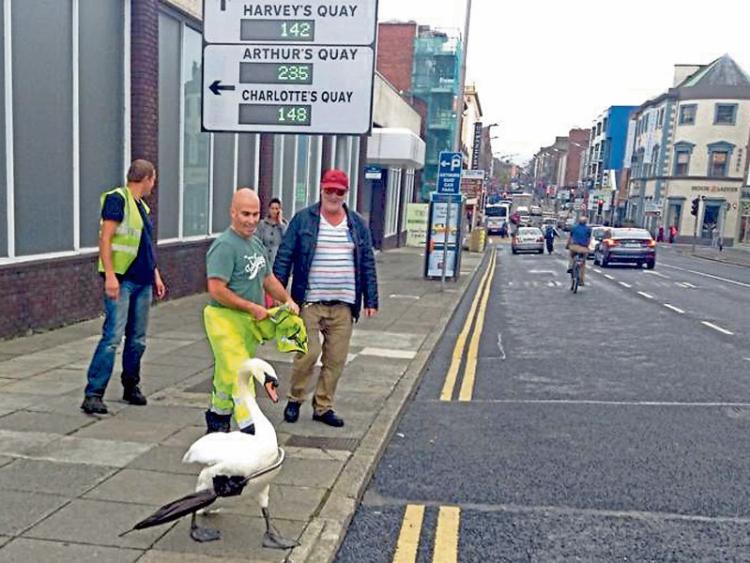 THE Limerick Leader has tracked down the photographer behind a picture of a swan that went viral this week.

The photo of the umbrella-toting bird was taken by local woman Maureen Hennigar two years ago, and it gained popularity after it was shared on the Rubberbandits’ Facebook page on Wednesday.

It has already racked up seven thousand likes, almost five hundred shares and over six hundred comments, and now the story behind the famous photograph has been revealed.

“We were going over Sarsfield Bridge, and there was a swan on the bridge. There was a man and myself trying to help the swan because he was getting caught in the traffic and he could have gotten injured,” Maureen, who is from Thomondgate, said.

“Next thing, the swan took off over Sarsfield Bridge.”

When the swan came down near the steps on the city side of the bridge, a construction worker appeared and joined the rescue effort.

“He hung onto it for a while, he had it from about the middle of the bridge. He was down the steps before we actually got the umbrella.

“He looked like a businessman, all we were short was a briefcase for him!”

Maureen, a regular contributor of reader photographs at the Limerick Leader, said she takes photographs on her phone every day while she’s out and about.

However, this photo has become her most famous one.

Although the picture is two years old, it resurfaced on Facebook through her ‘memories’, after which time the Rubberbandits found it and turned it into an online sensation.

Thankfully, the story has a happy ending: the group escorted the rogue swan as far as Arthur’s Quay, where he “took off” into the water.