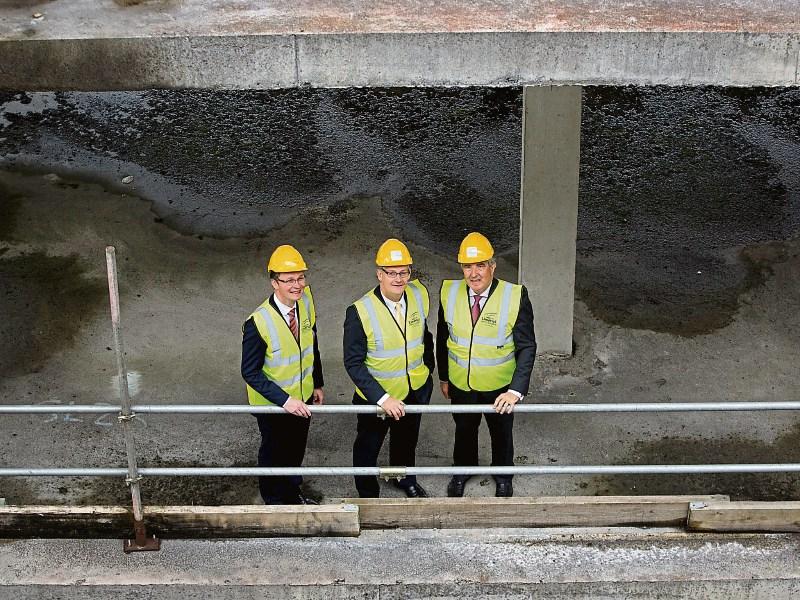 THE €500 million needed to fund and “rebuild Limerick” for the 2030 project is “available” through the European Investment Bank, the Ireland Strategic Investment Fund and other revenue sources, businessman Denis Brosnan has confirmed.

Mr Brosnan, the multi-millionaire former chair of the Kerry Group, also clarified that any “risks” in developing the Opera site – which requires a €160m cash injection – will be taken “step by step”.

But he told the Limerick Leader that he has no qualms about the availability of the funds needed, and said it’s not a ‘pie-in-the-sky’ plan, contrary to some criticisms from the public, who have seen many plans for this site in the past.

Mr Brosnan said that there is a “straight forward plan” for the Opera site, in creating five main buildings for financial and IT companies, in what will in time become Limerick’s “commercial centre”.

Last year, UL announced its intention to build up a major presence in the city, particularly as it is now facing a crisis in student accommodation in Castletroy. It outlined, in a lengthy statement, a plan to create a 350 residence student village, a Clinical Therapies community practice centre and a city centre design laboratory for the UL School of Architecture.

But Mr Brosnan said the student accommodation “does not work” in that part of the city. He suggested that UL may acquire an alternative location in the city.

The businessman, who has quietly been driving the city’s fortunes in acquiring four major sites since 2009, has also said that the target of creating 5,000 jobs in Limerick within the next five years “will be exceeded many times over”.

Mr Brosnan is now the chairman of the Limerick Twenty Thirty DAC company, which is wholly owned by the local authority, to drive investment, development and job creation.

He said the company will be sourcing the revenue required to build the sites, and not the local authority.

“I’m quite sure that lots of other local authorities will pick it [this] up and follow the Limerick example,” he said.

“The economy has picked up very significantly in the past three years. Within over 7,000 jobs created here, Limerick is picking up more than anywhere else,” he said.

In a post-Brexit world, he said there will be “many unknowns”, but argued that Ireland has to “minimise threats and maximise opportunities.

“A lot of big companies have come to Limerick already, starting small, but they want to develop,” he said.

“Limerick has changed like no other city in Ireland over the past four to six years, and I’ve always said that our job is to change Limerick from a large town into being a very significant city – not just in Ireland, but in western Europe,” he said.

The north Kerry native, who now lives in Croom, did not rule out the local authority acquiring other key sites for the city’s advantage in the future. The city’s main retail heart will be located in a redeveloped Arthur’s Quay, he said, and when the offices of the Revenue Commissioners moves Sarsfield House to the Opera site that will help facilitate further works.

“We have a lot of work to do before then. After the Opera site, we’ll move on to the Cleeves site, which is the biggest of all the sites, at eight acres,” he added.

While there is a vision for office space for some 750 workers in the Gardens site on Henry Street, and a commercial hub for the Opera site on Patrick and Ellen Street, there have been numerous suggestions for the former Cleeves site.

Local councillor James Collins, who is a board member of Limerick Twenty Thirty company, has said that LIT’s current development plans for Coonagh Cross should be redirected to the Cleeves site.

“One of the stated objectives of Limerick Twenty Thirty is to encourage people to study in Limerick. The Opera and Garden sites are more focused on ‘work in Limerick’. Cleeves must be seriously considered for ‘education in limerick’ and with LIT’s current plans to extend their campus to the semi-developed Coonagh Cross it is the perfect time for negotiations,” said Cllr Collins.

The Limerick Twenty Thirty concept originated from IDA claims that the biggest impediment to job creation in Limerick is the lack of suitable commercial office space.

“Limerick’s commercial office space market was dysfunctional, with no private sector development underway or planned.  Property developers believed it was not commercially viable or attractive. The IDA’s stated position was this was resulting in an inability to attract potential employment opportunities,” said Cllr Collins.

The fourth site, the 340,000sq.ft Troy Studios film hub in Castletroy, is nearing completion with an €8m film production house fit-out. In tandem, the council has also bought the former biblical centre on Dominic Street for €2.25m to develop a production and digital skills academy to feed into the opportunities created by Troy.