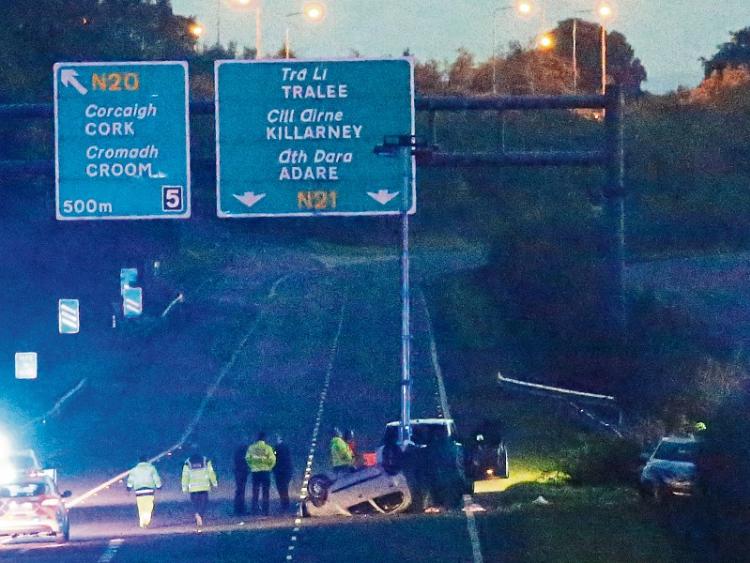 The scene of the horror crash on the M20 Motorway near Patrickswell Picture: Press 22

THE heart-broken family of a three-year-old girl, killed in a traffic accident on the M20 in Limerick at the weekend, have appealed for privacy in their grief as they prepare for her funeral.

The funeral services will take place this Friday and Saturday in Abbeyfeale, the family’s new, adopted home.

The girl’s twin brother and her parents who were also travelling in the car at the time of the accident were not seriously injured.

There has been widespread dismay at the child’s death, the eleventh fatality on Limerick roads so far this year.

And the family has been comforted by friends from around the country, particularly their compatriots from the Democratic Republic of the Congo who have travelled to Limerick to support them in their grief.

However, the Limerick Leader understands the family has been upset by some media coverage and has expressed a wish for privacy at this time of heartache and sorrow.

The accident happened along the M20 between Adare and Patrickswell at around 4.45pm last  Saturday. While the garda investigation into the accident is ongoing, it is understood that the child’s mother, who was driving the car, swerved to try to avoid another car after it had mounted the motorway’s central reservation barrier. This car in turn had swerved to avoid another car.

Emergency services personnel tried desperately to save the little girl who, it is understood, suffered serious head injuries. She was rushed to University Hospital Limerick where she was later pronounced dead.

Three men who were traveling in the other car were taken to hospital but were not seriously injured.

The family, believed to be from the Democratic Republic of Congo, had been living in Limerick city, but had moved in the last number of months to Abbeyfeale.

Local councillor, Seamus Browne SF has expressed his sympathies to the grieving family. “It is a terrible tragedy. If we can be of any assistance or supply any supports to them we’ll do that,” he said.

Fianna Fail TD, Niall Collins who lives near the site of the accident also expressed his sympathy.

“There has been a number of fatalities on this stretch of the motorway over the years. Given the weekend’s events, I’ll be asking the National Roads Authority to review this section of motorway, with a view to carrying out a safety audit,” he said.

Gardai at Roxboro Road, Limerick, have appealed for witnesses to contact them on 061-214340.