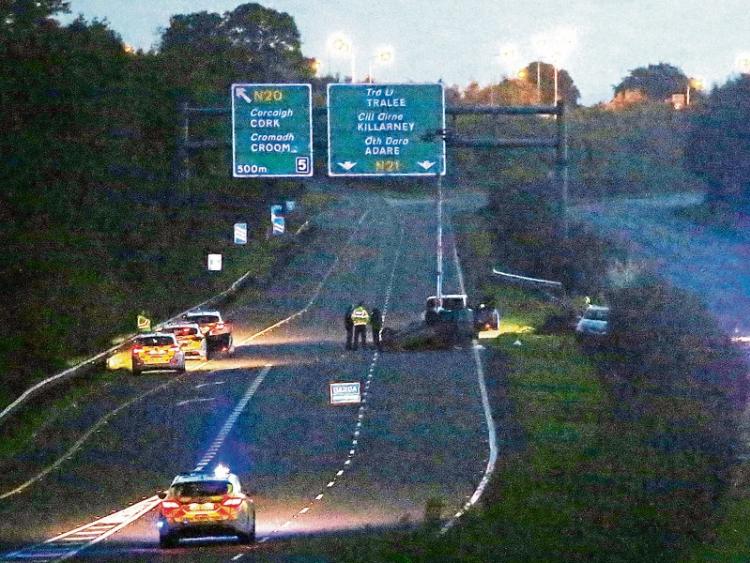 The scene of Saturday’s crash on the M20 Picture: Press 22

THE family of a toddler who died in a horror road crash on the M20 at the weekend have appealed for privacy in the wake of the tragedy.

Three-year-old Kellycia Nudiri died after she sustained catastrophic head injuries in the collision which happened on the southbound carriageway of the motorway near the Patrickswell exit at around 4.45pm on Saturday.

Three other men who were travelling in another car were also taken to UHL following the incident but they have since been discharged.

It is understood the family of the little girl, who are originally from the Democratic Republic of Congo, recently moved to the Abbeyfeale area from Limerick city where they had lived for some time.

“There is a very small African community in Abbeyfeale, maybe 10 or 15 people and, as far as I understand, they were here just a few months,” said Cllr Seamus Browne.

Both lanes of the motorway were closed for several hours following Saturday’s accident and investigations into what happened are being conducted by gardai attached to Roxboro Road garda station.

Kellycia was the eleventh person to die on Limerick roads so far this year.

Doras Luimni, which has been assisting the family since the weekend, has appealed for privacy on behalf of the family as they come to terms with the tragedy.

Meanwhile, gardai are appealing to all road users to support European Day without a Road Death (EDWARD) which is taking place this Wednesday.

The initiative, which has been organised by TISPOL –  the Traffic Police network in Europe –  is supported by the Road Safety Authority and An Garda Siochana.

“Road safety is a shared responsibility, just as our roads are a shared space. None of us has the right to behave in a way that endangers others. You might think that it’s OK to drive a little bit above the speed limit, or to just have a couple of drinks and drive home, or to not bother putting your seatbelt on in the car but the tragic reality is that these actions could have serious and devastating consequences for others. There are no more excuses - we need to improve how we use the road,” said Pearse White, director of the RSA.

Chief Superintendent Aidan Reid, president of TISPOL, is appealing to drivers to do their bit.

“Think about how you can reduce risk by always wearing a seatbelt, keeping to speeds that are both legal and appropriate for the conditions, not driving after drinking alcohol or taking drugs, and not using a mobile phone at the wheel.

“If everyone commits to making small changes, then the road safety improvements will be huge and we will achieve big reductions in the number of people who are killed or seriously injured,” he said.