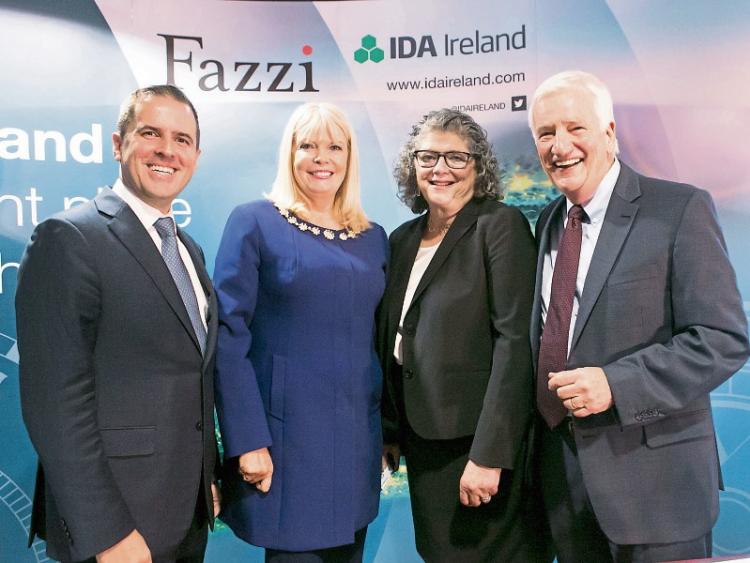 THERE was more good news for the local economy this morning, as a US-based medical coding company announced it is to create 300 new jobs in the city centre over the next five years.

Fazzi Healthcare Services, which has already been operating out of Ireland, announced its major expansion at the Savoy Hotel on Tuesday morning, with Minister for Jobs, Enterprise & Innovation, Mary Mitchell O’Connor, Mayor Kieran O’Hanlon and IDA Ireland.

Welcoming the jobs boost to Limerick and the Mid-West, the Minister said: “This is a very significant announcement for Limerick with the creation of 300 new jobs in a new and emerging business activity for the medical sector.  I am very keen to pursue opportunities for investment and job creation in new sectors, these are increasingly possible with our infrastructure and talented workforce which enables companies like Fazzi to undertake work for customers in different parts of the world.  It is also very heartening that such a large project has been secured for a regional centre which represents the ongoing success of the Government's Action Plan for Jobs initiative, particularly the new Regional Action Plan for the Mid-West.”

Limerick wakes to the news of 300 new jobs to be created by Fazzi Healthcare - a good start to the day!

According to IDA Ireland CEO, Martin Shanahan, this is the first company of its kind to make a major investment in Ireland.

Medical coding is a regulated process which looks at the transformation of healthcare diagnoses, treatments, procedures, outcomes and services into a universal codes. This is defined by the International Classification of Diseases (ICD), which is furthermore overseen by the World Health Organisation.

Founder Dr Robert Fazzi said that it is likely that the current workforce of 25, based at George’s Quay, will be “doubled” by the end of the year.

“We are absolutely thrilled to be here in Limerick.  Our Irish employees are clearly smart, dedicated and incredibly talented.  We are very thankful to the IDA and the Irish government for welcoming us and helping us to develop our business here.   Without question, Ireland has proven to be a country strongly supportive to the creation of innovative and growth oriented companies.”