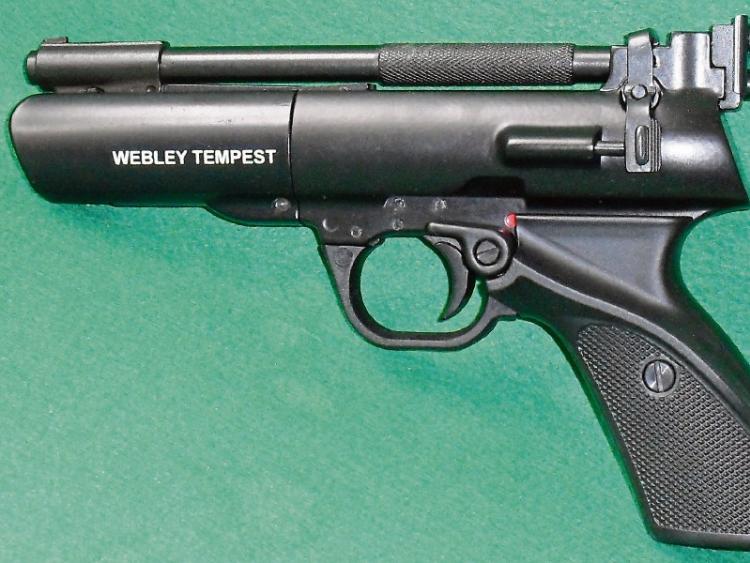 The firearm seized was similar to a Webley Tempest

A MEMBER of Republican Sinn Fein (RSF) has been convicted of firearms offences following an incident during which gardai ‘left behind’ a weapon which was recovered at a house in the city.

The air-pistol, which is similar to a Webley Tempest, was found on top of a wardrobe in the ‘box room’ of a house at Cosgrove Park, Moyross which was searched on August 15, 2014.

Throughout a lengthy hearing, Dylan Cahill, aged 23, who has an address at Lower Irishtown, Clonmel, County Tipperary denied possession of the weapon –contrary to the provisions of Section 2 of the Firearms Act 1924.

Limerick District Court was told a team of gardai – including members of the Special Branch – carried out a search of the house at around 8pm – a day after the search warrant was obtained.

They were assisted by members of the armed Regional Support Unit (RSU) who performed a “breach entry” to the house.

Detective Garda Pat Whelan told the court after he located the suspected firearm he placed it in a “transparent evidence bag” before later placing it in a multicoloured shopping bag as a “decent crowd” had gathered outside the house.

“I’m always very conscious about taking exhibits out (to the patrol car),” he said adding there was a “hostile enough atmosphere” on the night and he did not want members of the public to see that a firearm had been found.

Detective Garda John O’Connell told the court he arrested a man (not Mr Cahill) who was in the house when gardai arrived and that at one point he was given the suspected firearm so that he could show it to the man.

After completing the search operation gardai departed from the house – only to realise a short time later that the weapon had been left behind.

After being alerted, Detective Garda Whelan and his colleague, Detective Garda James Hourihane returned to the house to retrieve the firearm which had been left on a couch in the sitting room.

However, as they approached the house they observed the defendant carrying the multicoloured shopping bag which contained the firearm.

A foot chase then took place across a green area during which Cahill was observed throwing the bag over a wall into a depot used by Limerick City and County Council.

Cahill was arrested at the scene and, with the assistance of the RSU, the bag was recovered a short time later.

Detective Garda Whelan told the court the firearm was still in the sealed evidence bag when it was recovered.

Judge Marian O’Leary was told the defendant made admissions when interviewed on two occasions the following day.

He told gardai he had been outside the house as gardai were conducting their search.

He said he entered the house after they had left and having found the weapon he “knew it shouldn’t be in the house”.

When asked why he ran he said he had “panicked and f***** it away” when he saw the gardai returning.

In interviews the defendant admitted being a member of RSF and spoke of his beliefs in relation to a “32 county Ireland”.

Cahill told gardai he believed the weapon was a “child’s gun” and describing it as a “BB Gun” he denied knowing it was a firearm.

However, this assertion was rejected by gardai: “I fully believe that he knew what he was doing on the evening in question,” said Detective Garda Hourihane.

Being cross-examined by Shannon Biondi BL, Detective Gardai Whelan accepted it was “somewhat negligent” for the firearm to have been left behind following the search operation.

In his evidence, Detective Garda Tom Power of the ballistics section at the Garda Technical Bureau said the weapon was in a sealed evidence bag when he received it the day after the seizure.

He told the court he examined the weapon which “functioned as it is designed to do” despite being in poor condition.

A said the weapon, which did not have any branding or description, was designed to discharge pellets and that it was a considered to be a firearm as its muzzle energy exceeded 1 jewel.

Cross-examined by Ms Biondi Det Garda Power said he did not know how or why investigating gardai had put it to the defendant during interview that the weapon was a Webley Tempest.

However, he confirmed that the weapon seized was “very similar”.

Seeking to have the charge dismissed, Ms Biondi cited conflicts in the direct evidence of gardai relating to the serial number of the evidence bag in which the weapon was placed.

“This is problematic and calls into question the evidence in relation to the sealed bag,” she said.

Ms Biondi also submitted there were a number of breaks in the chain of custody.

She said there was no evidence as to what happened to the pistol after gardai left the house and she also submitted the absence of evidence from a fingerprint expert who examined the weapon at the forensic science laboratory amounted to a “gap in the chain of evidence”.

Sergeant Donal Cronin disputed the assertion there had been any discrepancy in the evidence relating to the serial number saying they were “more apparent than real”.

While accepting the weapon “left garda custody for a short time” he said he did not believe the chain of evidence had been broken and that there was “no question” of the weapon “not being under the control” of Det Garda Power while at Science Ireland.

Having considered the submissions, Judge O’Leary said she was satisfied the State had reached the necessary threshold to prove its case.

Cahill, who has no previous convictions, was fined €200. The father of a young infant, who works as a part-time barber, was given four months to pay.