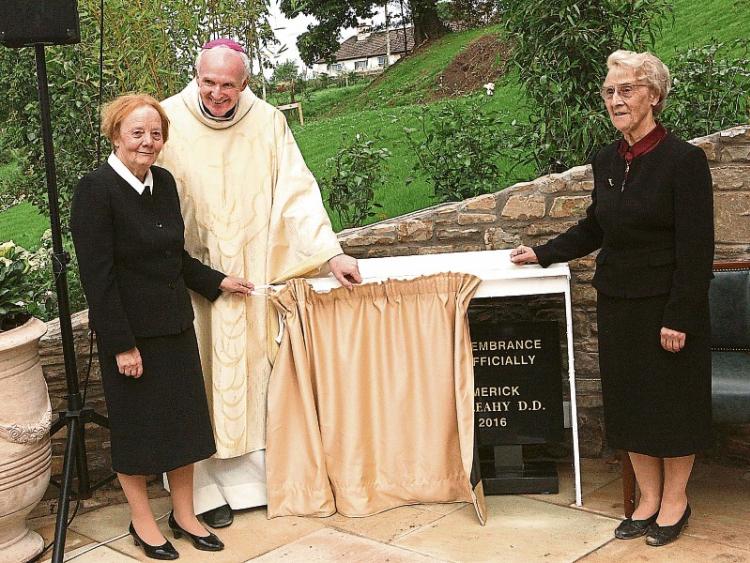 THERE are “daily miracles” in Cuan Mhuire said Bishop of Limerick, Brendan Leahy during his homily at a Mass to mark its 50th anniversary.

Bishop Leahy concelebrated the outdoor Mass at the addiction treatment centre in Bruree on Saturday afternoon. He also blessed a garden of remembrance, one of many recent developments due to the JP McManus Benevolent Fund.

Bishop Leahy said Irish men and women owe it to one another to be unrelenting in trying to break the cycle of rising addiction in society, and commended those who have entered programmes for their courage.

As he looked out upon the congregation of over 300, the bishop said that human weakness is constant but, regrettably now, not least through the internet, there are more temptations and forms of addiction than ever.

“Recently, Pope Francis has added a new work of mercy to the traditional list – care for our common home. We owe it to one another in Ireland, as a collective work of mercy on the part of society as a whole, but then also of each of us individually, to keep up our will to do something about the rising levels of addiction in society.

“We know how easy it is for all of us to get tired, to get discouraged, to lose courage when faced with the challenges of addiction. We can get demoralised as a country. We can switch off. But we’re only fooling ourselves. The problems don’t go away.”

Bishop Leahy pointed to the fact that alcohol is responsible for 88 deaths every month in Ireland and is a factor in half of all suicides here, with the World Health Organisation finding that Ireland has the second highest rate of binge drinking in the world.

Drug addiction, he continued, has also become a huge problem, with a UN report revealing that Ireland has the fifth highest rate of drug-related deaths among under 25s in the European Union. And there are other forms of addiction that we know are growing in our society – gambling, pornography, internet addiction, he added.

“We need to keep reminding each other, our families and our communities, our clubs and associations, our government officials and education establishments, our marketing outlets and media, to be courageous and put addictions on the agenda for discussion and action.

“Some have suggested we need new forms of pledges; others suggest we should focus more on peer-to-peer education… There are surely loads of initiatives and ideas that we can come up with if we put our mind to it.

“Today in Cuan Mhuire, there is a message of hope. Addiction need not be the last word. We can do something about it.”

Bishop Leahy had particular words for members of the attendance who have confronted addictions by taking the step to go to Cuan Mhuire and other addiction rehabilitation centres.

“I want to underline how they had courage. It takes courage to come away, and face yourself honestly and give yourself the chance to come to terms with an addiction.

“It can be much easier to turn away, to say ‘I can’t afford to take time off’, or to avoid coming here to keep up an appearance and say, instead, ‘I’m ok, no problem’.  But there are problems. It’s when people take the step to really own up and decide to do something about their addiction, then their healing and recovery begin. That does take courage, inner courage.

“Often, people who fall foul of addiction are demoralised by the fall itself. They are gripped by a sense of failure, leading to a downward spiral in terms of their sense of self-worth. It shows courage to admit it when we fall, courage to confront our weakness and come to a place like Cuan Mhuire. Rather than seeing this as a failure, it’s the opposite. It’s success. Truth be told, when we admit an addiction and take the step to look for help – it is one of the great victories in a person’s life.

See page 21 of county and city editions for more pictures